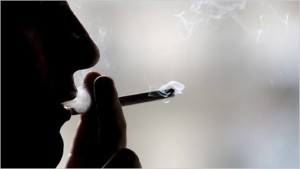 Roughly one-third of Americans say they have made a New Year’s resolution to lose weight in the last five years and 42 percent of people who said they smoke regularly in that timeframe pledged to quit the habit, according to the Thomson Reuters-NPR Health Poll.

Thomson Reuters and NPR conduct a monthly poll to gauge attitudes and opinions on a wide range of health issues.

The survey, which asked respondents their opinions and experiences with New Year’s resolutions focused on weight loss and smoking, found that 57 percent of Americans who have made a pledge to lose weight in the last five years were successful.  Respondents who made a resolution to lose weight said most often that their goal was between 10 and 29 pounds (48 percent). The second most popular weight loss goal was 30-49 pounds (21 percent).

One in four respondents said they smoked regularly in the last five years. Forty two percent of that group said they resolved to quit smoking over that time and 36 percent said their plan was successful.

“As the country re-evaluates ways to reduce runaway healthcare spending, it is time for all Americans to be resolved to take better care of themselves and others.  Data demonstrates that the majority of medical costs can be traced back to poor lifestyle issues such as obesity and tobacco use,” said Raymond Fabius, M.D., chief medical officer at the healthcare business of Thomson Reuters.  “While we know it often takes several attempts to lose weight and quit smoking, it is encouraging that many survey participants are taking strides to improve their health in 2012.  Let’s celebrate and support those who have resolutions to lose weight, stop smoking, eat better and exercise.  If they can meet these New Year goals they will be healthier and wealthier for it as well as helping to solve America’s healthcare crisis!”

The Thomson Reuters-NPR Health Poll is powered by the Thomson Reuters PULSE(SM) Healthcare Survey, an independently funded, nationally representative telephone poll that collects information about health-related behaviors and attitudes and healthcare utilization from more than 100,000 US households annually. Survey questions are developed in conjunction with NPR. The figures in this month’s poll are based on 3,015 participants interviewed from December 1-13, 2011. The margin of error is 1.8 percent.

For a copy of the full survey, click here.

About Thomson Reuters
Thomson Reuters is the world’s leading source of intelligent information for businesses and professionals.  We combine industry expertise with innovative technology to deliver critical information to leading decision makers in the financial, legal, tax and accounting, healthcare and science and media markets, powered by the world’s most trusted news organization.  With headquarters in New York and major operations in London and Eagan, Minnesota, Thomson Reuters employs more than 55,000 people and operates in over 100 countries.  For more information, go to www.thomsonreuters.com.

About NPR
NPR is an award-winning, multimedia news organization and an influential force in American life. In collaboration with more than 900 independent public radio stations nationwide, NPR strives to create a more informed public – one challenged and invigorated by a deeper understanding and appreciation of events, ideas and cultures.