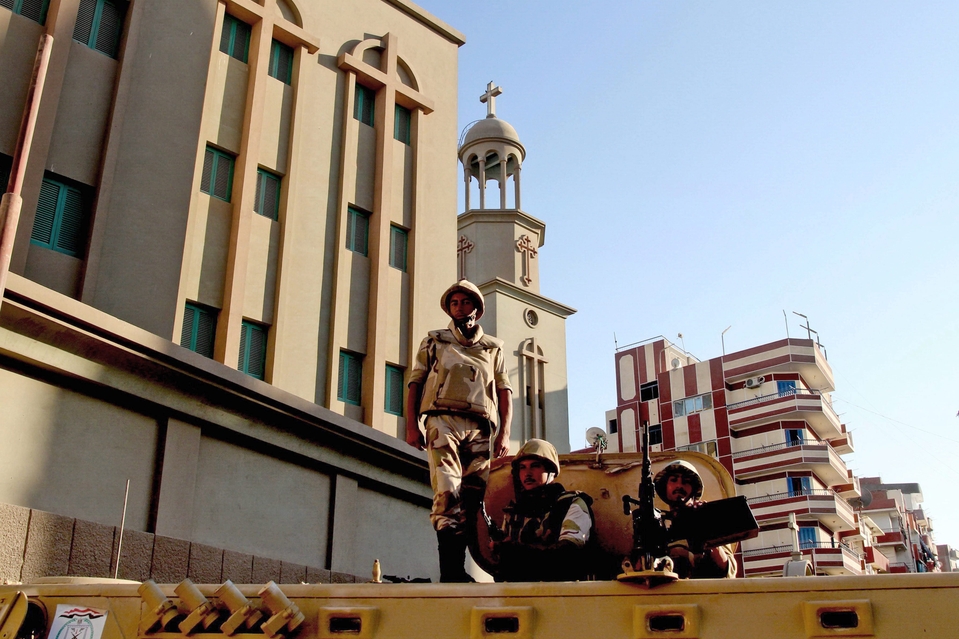 The Egyptian army’s crackdown on Mohamed Morsi’s Cairo supporters unleashed the largest attack on Egyptian Christians and Coptic houses of worship in the country’s modern history.

In recent weeks, international news outlets and human rights groups have reported Christians have been beaten, threatened and even killed, forcing millions of Christians, primarily from the Coptic Orthodox community, into hiding. Scores of Coptic churches, monasteries, shops, schools, clubs and orphanages have been looted and burned.  Some Coptic Christian communities are being made to pay bribes as local Islamists exploit the turmoil by seeking to revive a seventh-century tax, called jizya, levied on non-Muslims.

Despite the size of Egypt’s Christian minority – less than 10% of the country’s 85 million people – Islamists and Morsi supporters blame Christians for backing the military that toppled the head of state.

In response to the crisis, U.S.-based Re:source Global has set up the Egypt Emergency Fund to provide immediate, targeted relief and ongoing support to persecuted Christians in Egypt, whose lives and property have been destroyed in the violence.

Re:source Global is an international organization that pioneers and implements new models of financial and human capital investment that advance the work of the global Church.

“The fund allows all people around the world, not just those with financial surplus or local connections, to provide immediate relief to Christians in Egypt,” said Jimmy Lee, president of Re:source Global. “We may not be able to stop the persecution, but we can communicate that we have heard their needs and we stand with Egypt.”

To maximize the impact of any size donation, the first $100,000 of funds received will be matched dollar for dollar through the support of an anonymous donor.

Re:source Global has partnered with a trusted philanthropic organization (name withheld for security reasons) with a well-established network of ministry partners and churches in the region. The fund’s partners and networks are non-denominational and have a proven track record of addressing urgent needs among Coptic, Catholic, Protestant and Evangelical communities, as well as the majority Muslim population.

The fund’s resources will be utilized for immediate crisis needs – food, clothing, shelter, safe haven – for those most affected by the violence.  Long-term, the fund will support Christians in rebuilding their lives, churches and businesses. Re:source Global will provide investors with regular reporting of operations.

“Our local partners in Egypt have seen unprecedented collaboration among Christian groups, and among Christians and Muslims – neighbors helping neighbors – united in opposition to violence and murder,” said Lee. “Peaceful Egyptians desperately need our help in this crisis, and these are the people we will support.”