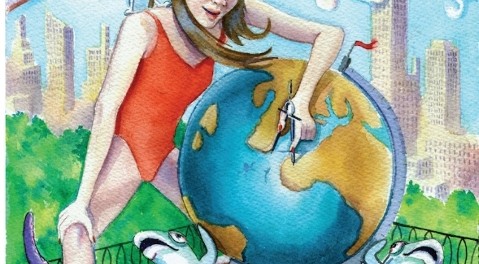 By Marriah Publishing, Special for  USDR

Marriah Publishing is proud to introduce new children’s book:  Erica from America: Swimming from Europe to Africa, which tells the story of Erica, who, as a child grew up wanting to do everything, and later decided to swim the Strait of Gibraltar. Her friends think she is crazy but Erica is determined (even if a little nervous) and decides she is going to swim from Europe to Africa no matter what. But when she gets to Spain, her plans are interrupted by the winds and another group of swimmers, who befriend her and ask her to swim with them. But ultimately, she and the other swimmers are all set to swim. They reach their goal to swim from Europe to Africa but not without a lot of activity during the  swim!

Erica L. Moffett is an award-winning author and she also works as Managing Director at Oppenheimer & Co. Inc. When she is not writing or working, she can be found swimming in the pools, rivers, or oceans. Erica from America is her first children’s book and is based on her first big open water swim from Europe to Africa. Subsequently, she has gone on to complete the Triple Crown of Open Water Swimming, which consists of the English Channel, the Catalina Channel, and the Manhattan Island Marathon Swim. She received a B.A. in music from Rhodes College and an M.B.A. from Yale UniversitySchool of Management and divides her time between New York Cityand Fort  Lauderdale.

Erica is an extraordinary person who has an amazing spirit and has been on many adventures which she shares through her writing. She is also working on a memoir about her adoption experiences, a section of which was first published on Woman Around Town (www.womanaroundtown.com) and which can now be seen on her website, www.ericafromamerica.com. She is also hoping to adopt a baby of her  own.

Martin Russocki is a celebrated and accomplished artist and illustrator.  He has invented several board games.  Martin lives inManhattan and his work can be seen at  MartinRussocki.com