The warrants charge Richard Matt and David Sweat with unlawful flight to avoid prosecution, according to William O’Toole, a U.S. Marshals Service spokesman. The warrants clear the way for the federal government to involve its considerable resources in the  manhunt.

“Every resource available to us will be used in bringing these two men to justice,” O’Toole  said. 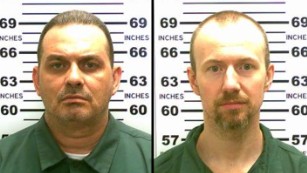 Matt, 49, and Sweat, 35, were discovered missing from their cells Saturday morning during a “standing count” of inmates at the Clinton Correctional Facility in Dannemora, New York, state police  said.

The pair used power tools and decoys designed to look like their sleeping selves in the sophisticated plot, they  said.

According to authorities, the inmates — who occupied side-by-side cells — cut through a steel wall and followed a series of tunnels until they emerged from a manhole outside the… (read  more)