As National Hot Dog Month approaches in July and Americans prepare to chow down on an estimated 150 million wieners on Independence Day alone, a new survey sponsored by Applegate, the leading producer of organic and natural meats, finds that while many Americans differ in preferences for what’s on their hot dogs, 77 percent of Americans are concerned about what’s in their hot dogs.

Despite consumers’ hunger for hot dogs, the survey also found that 74 percent agree that most are of “low quality.” 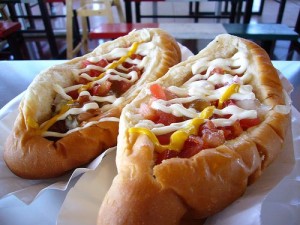 “Hot dogs have become the poster child for ‘mystery meat,’ and it’s no wonder with ingredients like sodium diacetate and partially hydrolyzed beef stock on most conventional hot dog labels,” says Stephen McDonnell, co-founder and CEO of Applegate. “Our survey found that many people have a love-hate relationship with hot dogs, but it doesn’t have to be that way.”

In fact, the survey found that 81 percent of people who consume hot dogs would rather purchase franks with a short ingredient statement that listed beef, water, sea salt and spices versus one with items like sodium phosphate and sodium nitrite. Additionally, 73 percent of respondents thought it was important for hot dogs to be made from animals that were not administered antibiotics or hormones, underscoring just how important this issue has become for shoppers.

“It’s clear that Americans are becoming more concerned about what’s in their food and where it comes from, and unfortunately food labels don’t necessarily tell the whole story,” said McDonnell, adding that labeling standards allow meats made from animals administered antibiotics to be labeled as “natural.”

In an effort to help Americans better understand what’s really in their hot dogs, Applegate launched www.whatsinyourhotdog.com earlier this month.  On the website, visitors can interact with videos and graphics rife with wiener puns and fun frank facts.

To celebrate National Hot Dog Month, Applegate will give away a one-year supply of Applegate Super Natural Hot Dogs. To enter, consumers can go to www.whatsinyourhotdog.com and leave a comment about their favorite hot dog topping, using #whatsinyourhotdog in their post. The giveaway begins July 1 and runs through the end of National Hot Dog Month, when one lucky commenter will be chosen at random.

Applegate makes a full line of natural and organic hot dogs.  All of Applegate’s hot dogs are antibiotic- and hormone-free, with no added nitrites and have less calories, fat and sodium per serving than conventional hot dogs.

More Survey Results
The Applegate “What’s In Your Hot Dog Survey” showed that when it comes to condiments, the yellow stuff cuts the mustard.  Mustard was the top topping, followed by ketchup, onions and relish.  The topping used least often is tomatoes.

The survey revealed some regional favorites for dressing a dog.

About the Survey
Survey was conducted by Toluna Omnibus with a national sample of 1045 US adults aged 18+, balanced on key demographics: age, gender and region with a margin of error of +/- 3%.  Survey conducted on-line, fielded June 8-12, 2012, from the primary sample, the following groups were screened for analysis: