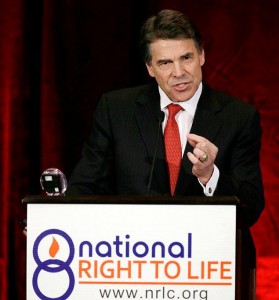 Family Research Council President Tony Perkins praised Texas Gov. Rick Perry and the Texas legislature for a new state law that, among other things, will restrict abortion in most cases to the first 20 weeks of pregnancy. Gov. Perry signed the bill into law this morning.

Of the new law Perkins said:

“Today we welcome Texas into the proud coalition of states moving to defend defenseless, unborn children. Under Governor Perry’s leadership, the state has ensured that scientific advancement and health concerns govern the state, and not the profit margins of abortionists. We applaud the brave state leaders – including Governor Perry – who refuse to back down from defending human dignity, even in the face of intense pressure and harassment.

“This new law is grounded in the latest science and in common sense. It will protect the most vulnerable – the unborn – after 20 weeks. If babies can feel pain around 20 weeks and are viable shortly thereafter, then no one can argue that an abortion isn’t ending life. The vast majority of Americans think that late abortion should be banned. Texas lawmakers have honored their wishes. The law will also ensure that women taking RU-486, an abortion-causing drug which has harmed thousands of women and killed at least 10, do so according to FDA guidance and with a doctor’s supervision. This will help protect women in case of complications,” concluded Perkins.