The Feds are at it again. They’ve had a busy year thus far, shutting down children’s lemonade stands, SWAT raiding Amish farmers for selling unpasteurized milk, body-slamming wheelchair-bound, terminally ill medical marijuana patients and – my favorite – arming our friendly narcotic traffickers to the south. Fine accomplishments by any measure of success, but criminal thugs never sleep, and neither does the Justice Department.

On August 25th, dozens of Federal Gestapo swarmed the Nashville headquarters of the legendary Gibson Guitar Corporation. The facilities, which employ some 2,000 American workers, were shut down and $2 million to $3 million worth of raw materials, guitars, and files were seized.

Evidently attempting to emulate the Bin Laden raid, the heavily armed SWAT force descended upon the unarmed employees with wildly inappropriate and excessive force. Terrified workers were rapidly prodded into isolated rooms at the butt of assault rifles and subjected to impromptu interrogations, without the presence of attorneys. Several workers were threatened with 5-year prison terms if they refused to cooperate. 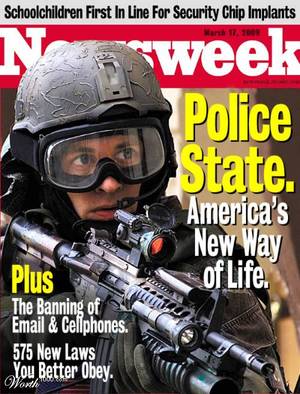 According to the Justice Department, Gibson violated an obscure Indian law which dictates that one of the types of wood they import be finished by Indian workers. Why the DOJ is concerning itself with enforcing Indian regulations on American soil is anyone’s best guess. Even more bizarre is their admission that the Indian government had no problem with the arrangement and never requested such action.

Gibson’s CEO, Henry Juszkiewicz, is understandably outraged. Like most sane Americans, he takes pride in the company’s steadfast refusal to scuttle its American workforce and set up shop in a third world country. Unfortunately the Justice Department has other ideas. They literally informed Mr. Juszkiewicz that the company’s problems would “disappear” if the company “moved to Madagascar.” Let us hope this isn’t part of Obama’s newest job growth strategy.

Much of the mainstream media had attempted to portray the story as some kind of environmental protection sting. They fail to mention that the type of wood in question (Indian Rosewood) is not even endangered, much less illegal to import. In fact, virtually every other guitar manufacturer uses the wood in its own instruments. Such facts beg the question, why is Gibson being singled out?

It may have something to do with the fact that Gibson’s CEO recently donated thousands of dollars to Republican Party candidates and has resisted unionization of his company’s workforce. It has also been noted that his primary competitor (also a user of Indian Rosewood) at C.F. Martin & Company has supplied the Democratic Party with $35, 400. While such facts may be mere happenstance, it certainly raises eyebrows.

Regardless of the reasons behind the DOJs vendetta, it is now more important than ever for the American people to stand behind the besieged corporation. Gibson has consistently hired new workers, even during the height of the 2008 economic meltdown. Its level of craftsmanship is unmatched and Gibson is a champion exporter, selling over 60% of its product on the global market. Against all odds, the company has thrived on American soil and put people to work. If anything, it should be rewarded with the same kinds of tax breaks as General Electric.

So go buy yourself a Les Paul. Just make sure to play it through headphones, lest you find armed agents assaulting your residence.

Born and raised in central Texas, Chris has been an avid fan of history and politics for as long as he can remember. He graduated from Texas State University in 2008 with BAs in History and Anthropology. Afterwards he moved to Spain, where he spent a year in hospitality management and teaching English. He currently resides in Houston, pursuing an MA in History and working as a tutor of Spanish, History, Government, Economics and Reading. Chris is a libertarian by nature.