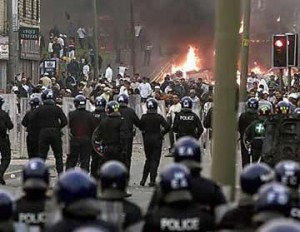 There has been a great deal of blame placed on various parties when it comes to the UK riots.  Most of it on the wrong persons or for the wrong reasons, in our opinion.  Finally, Jonah Goldberg, of National Review Online, gets closer to the mark with his article, “Riot Rationalization Misses the Mark.” Thanks to Mike Gallagher for bringing this to our attention:

Riots are fascinating things. How lawless greed, cruelty, and violence suddenly set fire to the minds of men is one of the most mysterious, almost magical (though not in the positive sense) manifestations of human behavior.

And because they are a manifestation of human behavior, riots are as old as human nature. They were a common affair in cities before ancient Rome was new. This should invite humility in anyone purporting to know why riots happen… (read more)