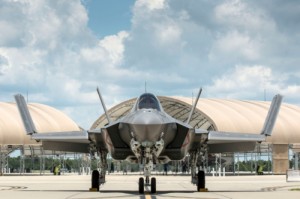 “We are committed to the Navy’s vision for the F-35 that will revolutionize forward based combat power in current and future threat environments,” said Lorraine Martin, Lockheed Martin executive vice president and F-35 program general manager. “The F-35 represents the new standard in weapon systems integration, maintainability, combat radius and payload that brings true multi-mission capability to the Navy.”

The F-35C, the U.S. Navy and Marine Corps’ CV, has larger wings and more robust landing gear than the other F-35 variants. The CV has the greatest internal fuel, at 19,624 pounds, making it suitable for catapult launches and fly-in arrestments aboard naval aircraft carriers. Its wingtips fold to allow for capacity and, like the F-35B, the C-variant uses probe and drogue refueling.

The F-35 Lightning II is a 5th generation fighter, combining advanced stealth with fighter speed and agility, fully fused sensor information, network-enabled operations and advanced sustainment. Three distinct variants of the F-35 will replace the A-10 and F-16 for the U.S. Air Force, the F/A-18 for the U.S. Navy, the F/A-18 and AV-8B Harrier for the U.S. Marine Corps, and a variety of fighters for at least 10 other countries. The U.S. Navy plans to declare Initial Operational Capability with the CV in 2019.

Headquartered in Bethesda, Md., Lockheed Martin is a global security and aerospace company that employs about 118,000 people worldwide and is principally engaged in the research, design, development, manufacture, integration, and sustainment of advanced technology systems, products, and services. The Corporation’s net sales for 2012 were $47.2 billion.