Hillary Clinton is in the driver's seat for the 2016 Presidential race and in position to make history as America's first woman president if she learns the lessons and corrects the mistakes of her 2008 run, including her Iraq War vote explanation and her failure to capitalize in caucuses on primary victories in those states, assert ex-Clinton White House aide Robert Weiner and policy analyst Nakia Gladden in a Michigan Chronicle article just out.

Weiner, a Democratic and national issues strategist who was the spokesman for three congressional committee chairmen before joining the White House staff, along with co-author Gladden, say: “With the cognoscenti of both parties and the media ever more certain Hillary Clinton – who won the 2008 Michigan primary — will run in 2016, and Clinton herself taking steps to allow the choice, she needs to look back and learn some lessons from her failed 2008 campaign before her adrenalin rushes her forward.  Even Bill Clinton said recently, 'You must learn the lessons of your mistakes … without becoming a general who fights the last war.'” 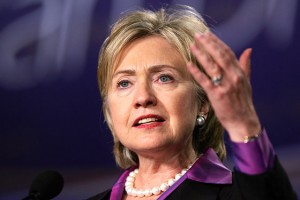 Weiner and Gladden write: “Most significantly, she was reluctant to acknowledge that her vote to authorize the Iraq War in 2001 was against the national grain that evolved.  She did not backtrack until September 18, 2006, when she said to Meredith Vieiraon the Today Show, 'If we knew then what we know now… I certainly wouldn't have voted that way.'  It's a point her close friendJames Carville had been saying for a year she should make.   On September 23, 2007, Tim Russert again dragged out of her on Meet the Press, 'If I had known then what I know now…, I would not have voted the way that I did.' Chris Matthews asserted that Russert 'finally reeled the big marlin into the boat,' not realizing she said it a year earlier. Both statements were too little too late. Gen. Wes Clark, one of her staunch supporters, told us that Hillary's decision not to criticize the initial war action was a 'general election decision.'  However, she never got to the general. Obama filled the anti-war vacuum.”

Weiner and Gladden continue: “Clinton recently narrowly avoided making a similar mistake on Syria which could have affected a 2016 run. President Obama planned missile attacks in Syria even though popular support was 3-1 against it.  At the last minute, just as the President was preparing an Oval office speech to announce the launch, a diplomatic solution materialized.  New Secretary of State Kerry made an off-the-cuff response to a reporter which became a Putin-Obama lifeline: '[Assad] could turn over every single bit of his chemical weapons to the international community in the next week.'  It also saved Hillary.  She had just met with Obama and was ready to support his launch.  Even Bill O'Reilly concedes that diplomacy is 'now working.'”

Weiner and Gladden warn: “She will face repeated questions about Benghazi.  Democrats say it's a 'phony scandal,' typical mid-level multi-agency bureaucrats harmonizing a talking points memo, combined with Congress denying State's funding request for increased embassy security worldwide.  Indeed, just this September 29, the House finally passed a bill 'fully funding the Administration's request for embassy security,' trumpeted in a press release by Foreign Affairs Chairman Ed Royce(R-CA). Republicans know that funding denial was a legitimate counterpunch by Democrats.  Unanswered is why the Ambassador went to the unprotected outpost, but Hillary's involvement was unlikely. As Obama's heir, she will also be blamed for IRS disproportionately targeting conservative groups even though liberal groups were also peppered with questions.”

Weiner and Gladden recognize, “Bill is brilliant as 'Secretary of Explaining,' as President Obama called him, but he also speaks off the cuff.  Recently, Bill condemned Democrats for whining about 'gridlock' even though polling shows a majority blame it on Republican congressional obstructionism.  President Clinton will definitely be enormously helpful, but Hillary will sometimes have to keep the Big Dog on a leash.”

Weiner and Gladden assert, “The Ready for Hillary PAC is not just any 'draft' group.  Big names are signing onto their fundraising letters and working as advisors including Senator Claire McCaskill (D-MO), former Michigan Governor Jennifer Granholm, Bill Clinton strategists James Carville and Harold Ickes, and Obama veterans. According to Communication Director Seth Bringman, the PAC now has impressive numbers: over 1,000,000 Facebook supporters, 10,000 donors, and 100,000 people with Ready for Hillary bumper stickers.  The staff's enthusiasm is apparent.”

Weiner and Gladden add, “Her speaking tour is consolidating constituencies. She has recently supported gay marriage, a woman for President, and women's health and birth control choice.  She forcefully opposed voter suppression of minorities and the recent government shutdown.  She just endorsed Terry McAuliffe for Virginia Governor, and she's been lunching with President Obama and breakfasting with Vice President Biden. Congressional Black Caucus Dean John Conyers (D-Detroit) told us, 'Opponents would hate to be against her for the nomination.' Then he surveyed his staff who unanimously agreed, 'It's hers to lose.'”

Weiner and Gladden note, “Her resume, starting with Texas voter registration organizer, then US Congress committee staff, First Lady, US Senator, and Secretary of State, is unsurpassed.  Her 1995 'Women's rights are human rights' speech in Beijingas First Lady remains a standard for courage. Most recently at State, she helped topple Qaddafi, established elections inBurma including opposition leader Aung San Suu Kyi, emphasized women's rights throughout the world including standing up with and for rape victims, and imposed harsh sanctions on Iran – let alone being part of the Got-bin Laden Team.”

Weiner and Gladden suggest, “With Rasmussen showing her 63-12-4 over Vice President Biden and New York Governor Cuomo, Quinnipiac at 65-13-7, NBC at 60 to 11 over Biden and 7 for Elizabeth Warren, and a lead over Republicans Chris Christie, Marco Rubio, Rand Paul, and Ted Cruz by at least eight points, it's no wonder why Republicans are concerned about her as Democrats consolidate.”

The authors predict that “she will re-incorporate McAuliffe (former DNC Chair) and personal confidante Huma Abadin, widely respected inside Washington, back into her brain trust.  She will correct organizational errors of 2008 — including losing the delegates in the major Texas caucus after she won its primary, and trying to change the rules for counting her victoriousMichigan and Florida primaries after she won them when the states had violated the Party's calendar.”

They point out that “the eternity between now and 2016 can change the field.  Past 'inevitable' candidacies disintegrated fromMario Cuomo and Howard Dean to Rick Perry and Ted Kennedy.  Jimmy Carter and Bill Clinton came from nowhere a year in front to win.”

Weiner and Gladden conclude, “Right now, Clinton is in the driver's seat – and if she wins, she will be a superbly competent and historic first woman American President.”