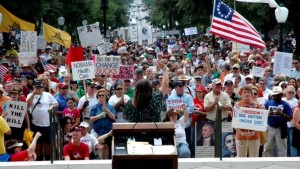 It’s probably not the endorsement that incumbent Utah Sen. Orrin Hatch needs right now, as the Republican is locked up in a primary challenge from Dan Liljenquist. But Saturday on Melissa Harris-Perry’s MSNBC show, former Pennsylvania Sen. Arlen Specter, the co-author of “Life Among the Cannibals: A Political Career, a Tea Party Uprising, and the End of Governing As We Know It,” pleaded with Utah voters to keep their senior senator.

Specter told Harris-Perry that the current climate in Washington, D.C. isn’t lending itself to electoral success for moderate incumbents, which he said has been the focus of a crusade outlined in his book.

“No, that is what is happening in Washington today. … [It] happened again in the last few days when Sen. Dick Lugar was cannibalized,” Specter said. “Cannibals are devouring senators. If you don’t follow orthodoxy, vote the party line right down the line, if you have a 93 percent conservative voting record like Bob Bennett in Utah — that is not conservative enough.”

Specter pointed to other elections which a GOP “establishment” candidate lost — or almost lost — to a tea party candidate. He asked Utah voters…(read more)