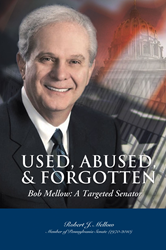 Former Senator Bob Mellow has recently released a tell-all book about his service to the State of Pennsylvania and his federal incarceration. In the book, he shares the intimate details of his interactions with other political figures, including the six governors under which he served. He also details his time spent in prison as inmate number  70 626-067.

Readers may have seen or heard the former senator’s story through other outlets, but few have heard former Senator Mellow’s side of the story. In his new book, he outlines the events surrounding his service and ultimate incarceration. He also discusses his thoughts, fears, and beliefs in an in-depth way that has never before been revealed. He wonders, “What did I ever do to deserve this  treatment?”

Former Senator Bob Mellow served in the Pennsylvania senate from 1970 to 2010. He was the senate democratic leader and president pro tempore later in his career. In 2010, he was charged with two counts of federal conspiracy*. The first count was regarding a technical violation on a tax return, and the second was an accusation that the senator was using his office to perform political work on state  time.

The former Senator pleaded guilty to the charges, but still maintains his innocence to this day. He spent sixteen months in a federal prison. His book explains that he believes that part of the reason he was accused and prosecuted at all was because a federal prosecutor had a long-time dislike for the senator. Also, in March 2013, after he was incarcerated in federal prison, the newly elected Pennsylvania attorney general brought charges against Senator Mellow based on a 4-1/2 year state grand jury investigation in which the senator’s name was never mentioned**. Those charges were later dismissed. In fact, the Pennsylvania attorney general who pushed the state charges at that time had once announced that she would run against Senator  Mellow.

Former Senator Mellow describes his treatment in a federal prison for a nonviolent crime as nothing short of “heinous.” He writes, “There I was in solitary confinement with a very small bunk bed—30 inches wide and 66 inches in length. The cell was approximately seven feet by nine feet. At night, before trying to get some sleep, paper was placed in the cell’s floor to keep the rats from  entering.”

He also describes how his very public divorce was the catalyst to his federal charges. He outlines everything that he lost in the process and shows readers the often vicious nature behind  politics.