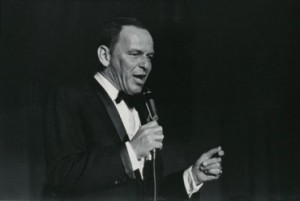 Although he passed away over a decade, the life of Francis Albert Sinatra (1915-1998) is still celebrated many years later.  This year his birthday of December 12 will be remembered with a throwback to the postwar heyday of supper clubs, jazz orchestras and after-six elegance,  A Swingin’ Affair!.  This event will be a three-stage gala celebrating the life, artistry and birthday of the legendary singer and actor, Frank Sinatra (born, Dec. 12, 1915). Named appropriately for Sinatra’s acclaimed 10th studio album, A Swingin’ Affair! gives fans a unique, behind the scenes Lifestyle Experience and will be hosted by actress/model/activist Pamela Anderson, and held in three historic locations on Dec. 11, 2011 in Palm Springs, California. The event will benefit the Alzheimer’s Association. Performers for this unforgettable night include Frank Sinatra Jr. and his 20-piece Orchestra, Actress/Broadway star Lainie Kazan, singer/pianist Daniel Joseph Baker (from America’s Got Talent), X Factor finalist Phillip Lomax, Broadway Actor/Singer Luca Ellis, and jazz artist Matt Dusk. The gala features a sumptuous three-course dinner, signature cocktails and a star-studded blue carpet in honor of Ol’ Blue Eyes.

A Swingin’ Affair! celebrates the life of the undisputed king of the postwar entertainment era, Frank Sinatra. Launching his legendary career in 1940 as the vocalist for the Tommy Dorsey Orchestra, Sinatra’s confident baritone voice and commanding stage presence changed the look and sound of popular music, earning him the nickname “Chairman of the Board.” Broadening his artistry to include acting and movie musicals, Sinatra famously starred in a series of film classics, including “From Here to Eternity” (1953), “Guys and Dolls” (1955), “High Society” (1956), “Pal Joey” (1957), and many more. By the time of his death in 1998, Sinatra had captured three Academy Awards, four Golden Globe Awards and 13 Grammy Awards. He boasts three Hollywood Walk of Fame stars, and is the recipient of the 1993 Desert Palm Achievement Award, among countless other honors.

As befitting Sinatra’s immortal style, A Swingin’ Affair!, according to the event’s website, “showcases the absolute finest in retro-styled entertainment.” The festivities begin with an exclusive VIP cocktail hour (for which only 150 VIP ticket holders will be able to attend) at Sinatra’s former Twin Palms estate, which was designed by famed architect E. Stewart Williams and lived in by Sinatra and first wife Nancy and then Ava Gardner. Experience the lap of luxury in this grand estate where a scar still remains in the bathroom that Sinatra himself thrust a bottle of Jack Daniels cracking the surface of the counter. Canadian jazz artist Matt Dusk, who has three No. 1 international hits, will perform and cocktails and canapes will be served poolside from 2-5 p.m.

“Stop two” of the evening will be the main gala (for which there are tickets available at the time of this posting) at the Riviera Palm Springs where Sinatra held most of his lavish parties. Architect and visionary Irwin Schuman designed the historic location and the event will be fashioned in the grand Hollywood Regency style. Pamela Anderson will be on hand as the host of the night, with performances by Frank Sinatra Jr. and his Big Band Orchestra, singer/pianist Daniel Joseph Baker from season 6 of America’s Got Talent, Matt Dusk, and actress/Broadway star Lainie Kazan. A sumptuous three-course dinner will be served and cocktails will be flowing.

The night closes with an after-party, starting at 11:30 p.m., at the Starlite Lounge in the Riviera. Daniel Joseph Baker will once again perform, as well as Phillip Lomax and recent Ovation award nominee, Luca Ellis. A special toast and a cake will be cut in honor of Sinatra’s birthday.

The man born Francis Albert Sinatra would have been 96 years-old this year, but he lives eternally in the hearts of true music lovers and film buffs. With its heady combination of glitz, glamor and jazz-era entertainment, A Swingin’ Affair! fetes the legendary Mr. Sinatra in a style that his memory so richly deserves. Let the Jack Daniels flag fly once more as we celebrate the life and the legend that was Frank Sinatra!  If you are a Sinatra fan, then this is one event you do not want to miss.