In addition to issues of impressment, issues of fair trade were upmost in the minds of the war hawks prior to the declaration of war on Great Britain that set off what some historians call the “second war for independence”.  The free trade issue was linked to impressment – by removing native or naturalized American citizens from merchant vessels, or even British citizens, the Royal Navy was engaging in what many American believe was an unlawful search and seizure.  But it wasn’t the only issue. Donald Hickey’s newest book on the War of 1812 cites a couple of unique reasons that require us to look back further to issues of war. 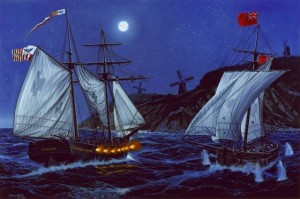 With the Republican ascendancy in 1801 (Jefferson assumed the presidency and in no way related to today’s Republican Party), Jefferson got rid of the Jay Treaty and our improving relations with Great Britain begun under Washington. In the years after the Treaty of Ghent (1783) that ended the American Revolution, relations between Great Britain and the new United States of America were disintegrating, particularly over issues of the western frontier forts that were not abandon by the British per the treaty and the issues of seizing American vessels and impressing people into the Royal Navy. John Jay, our first Chief Justice and one of the contributors to the Federalist Papers, was sent to negotiate a new treat and avert war with Great Britain. The treaty would eliminate control of the western forts by the British within two years and recover losses and damages for British seizure of vessels. It passed in the Senate despite an uproar. Many people did not like these good relations with Great Britain and this was just one issue that would doom the Federalist Party. The other was Hamilton’s national bank. Many also felt the Federalists were too elitist for the growing democratic bent that was sweeping the nation. The British took the Jay Treaty’s removal as a sign to reoccupy the western frontier, which they did. And the Republicans cut the peacetime defense spending, believing that a large standing army was not in the best interest of a republican government and that it increased the likelihood of war. The only concessions were the construction of six sloops during the Tripolian War (1801-1805).

The United States maintained neutrality throughout the later part of the 18th century and into the 19th century. Exports and trade rose dramatically, helping to make the burgeoning country quite well off. During the Peace of Amiens from 1801 – 1803 between Great Britain and France, exports dropped over dramatically, only to increase to over 100 million dollars by 1807 with the resumption of hostilities. Madison, as the American minister in London, accused the British of interference in free trade. The British stepped up the enforcement of a maritime law called Rule of 1756. “The Rule of 1756 held that trade was closed to a neutral in time of peace could not be opened in time of war” (Hickey 10). Instead of preventing trade with France and the French West Indies, the United States got around it by making a stop in a US port prior to heading south, making a “triangle” across the Atlantic Ocean. In 1805 Essex decision, the British High Admiralty ruled that importation to the United States was no longer proof of “bona fide importation” (Hickey 11). Thus, the Royal Navy began seizing American ships, causing maritime insurance rates to skyrocket and dampening the economic growth in the United States with staggering effect. Despite that the fact that ruling was “set aside “as an embarrassment  under the new British Whig administration of Lord Grenville, the effects were still felt and the Americans knew the British Navy would not feel compelled to obey the new prime minister.

Lastly, the Restrictive System from 1806 – 1811 played a huge role in bringing Great Britain and its former colonies to blows again. As Hickey states, the United States was feeling the restrictive trade rights from both the belligerents. France enforced the Berlin Decree, which forbade the importation of British into Europe (the Milan Decree did the same) and the British issued the Orders-in-Council. The Republican government retaliated with the restrictive system that forced the two sides to show greater respect for the Americans. The first non-importation agreement in 1806 had a list of restricted import goods from Great Britain but did not include textiles. The ill-advised and economically devastating Embargo of 1807 was a non-exportation (emphasis mine) agreement that did not allow American ships or goods to leave port. There were loopholes to get around it including the overland trade to Canada and simply leaving port illegally. Secretary Albert Gallatin asked Jefferson for power of enforcement, and in 1809, customs officials were given sweeping powers of authority in what was considered an illegal power grab to enforce an untenable and economically crippling law. The Non-Intercourse Act of 1809 replaced the Embargo Act and clamped down further, not allowing trade with Great Britain or France and their colonies, but once American ships left port, they could strike out for any place. Hundreds went bankrupt and were throws into debtor’s prison. It was against the spirit of freedom and liberty that, just a generation before, had been shaken off.

Added to the political and economic concerns, the Little Belt Affair, much like the Chesapeake Affair, when the President fired unprovoked on the Little Belt, and the Battle of Tippecanoe, the results of which droves Native groups in the Old Northwest territories toward the British camp, would push the two countries closer to the brink of war. Neither was willing to budge very far in either diplomatic or economic issues; both were seeking to protect their best interests. As the drift toward war continued, the British began launching coastal raids, for which the United States could do nothing to stop. If you would like to read further, please consider picked up a copy of Donald R. Hickey’s “The War of 1812: A Forgotten Conflict” (Bicentennial Edition). His other books are good reads, too.