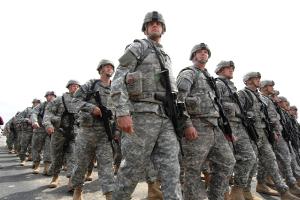 “The National Guard in all 50 states, Guam, Puerto Rico, the U.S. Virgin Islands and the District of Columbia this week will begin furloughing nearly all of its dual-status military technicians one day a week through the end of September.

“These soldiers and airmen perform day-to-day administrative, logistical and maintenance functions. The Pentagon exempted in the name of military readiness all other uniformed personnel from furloughs due to automatic budget cuts, yet curiously extended no such protections to a nearly 50,000-member force critical to National Guard readiness.

“The National Guard provides significant portions of the overseas war-fighting capability for the U.S. Army and the U.S. Air Force. The Guard also is the military’s first responder at home. Fulfilling these many and varied obligations could become increasingly difficult as the furloughs continue.

“There also is a human cost here. The nation is telling men and women who serve their state and nation—most of whom have deployed into harm’s way at least once and remain subject to future deployment—to take a 20 percent pay cut over the next 11 weeks. This is not how a great and appreciative nation supports its troops.

“The furloughing of National Guard dual-status military technicians must be stopped before it takes a toll on Guard readiness and personnel. A bill introduced by Rep. Steve Palazzo of Mississippi in the U.S. House of Representatives would provide Guard mil techs with the exemption from furloughs other uniformed military personnel enjoy.

“Now that the furloughs are a reality, Congress must move quickly to ensure that, indeed, all uniformed military personnel are exempt.”