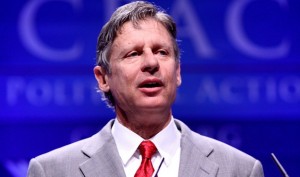 In Part 1 in this series I introduced the reader to former Gov. Gary Johnson, a very likable, but lower tier candidate for President of the United States.  He has failed to catch on, in my opinion, not because he lacks qualifications. In fact, as you will read in part 1, he may be the most qualified.  Sure, he looks a little like a professor and he comes across even disinterested. But he has a record as good, or better, than any of his opponents; but one issue – his passion about the legalization of drugs, makes it difficult for him to resonate with typical GOP voters.

Johnson was a guest on my show, the Price of Business, and this is the first half of that interview.  Tomorrow will provide the conclusion.  Although fairly “raw,” this interview has been slightly edited for presentation purposes, but the comments remain intact and in context.  I provide this interview for the reader to have the opportunity to learn more about Johnson and, specifically his positions on drugs.  I will add italics to those comments and will add comments at the end.

I’m going to go straight to my next guest, Gary Johnson, former governor of New Mexico. I understand you’re a conservative with a libertarian bend, that’s kind of how you’re described. Gary, glad to have you on the program.

Kevin, thank you for having me on the program. I’m in Houston today. I’m going to be speaking tonight at the Crowne Plaza Hotel, there at Reliant Park at 6:30.

Yeah, in fact, it appears I might be speaking there as well. I’ll be warming up the crowd there is what it sounds like, and so I’m looking forward to being there.

And of course, if you’re ahead of me, why, I don’t know if anybody will even hang around.

Well, first off, I’m an entrepreneur, first and foremost. I’ve been an entrepreneur my entire life, and I consider what I’m doing right now as entrepreneurial. I started a construction business in Albuquerque in 1974 as a one-person handyman, me, and in 1994, I actually had a thousand employees, electrical, mechanical, plumbing, pipe fitting.  Sold that business in 1999 and nobody lost their job, and that business is doing better than ever. And I also got to serve as governor of New Mexico from 1995 through 2002, and I really thought I made a difference as governor of New Mexico. I’m going to make the outrageous claim that I was fiscally the most conservative governor in the whole country.

I would say that’s probably very true.  Tell us a little bit of the hallmarks, if you will, about your tenure.

As the reader can see, we did not get far in the conversation with the governor without going to a discussion on his policies on the legalization of marijuana. I found it interesting that he considered drug legalization to be one of the three “pillars” (my expression, not his) of his administration.  It is not only what he became “known for,” but it is clearly how he wants to be remembered.  What is significant is that the tone of the interview changed significantly after this as you will see in part 3.  The audience responded strongly on the show’s chat and in email, and instead of focusing on his record of achievement in an area most Americans are concerned about — economic recovery; it became a discussion on drugs.  He may have “three strengths” he wishes to be known for, but this last one will almost certainly supplant the others as you will see in part 3.