News Round Up, By Kevin Price, Publisher and Editor in Chief. 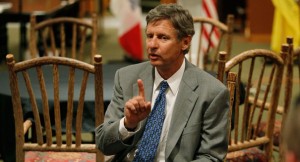 It is all but official, former New Mexico governor Gary Johnson is going to abandon his efforts to secure the GOP nomination for president and is going to run as a Libertarian.  In light of my interview with him this decision is many things, but not surprising.  Johnson’s odd and arguably extreme position of the legalization of drugs might fly in a race for governor of New Mexico, but would have little appeal for one running for president in a “law and order” party (the GOP).  In spite of the fact Johnson had one of the most successful records in the country as a governor, he could never gain traction as a Republican presidential candidate. There is no doubt the media squeezed him out as “unacceptable” by its treatment and its repeated exclusion from debates — how anyone who held any statewide office before was excluded from the debates was beyond me, but he often was and was never taken seriously by the GOP establishment. Tonight the media is reporting that Johnson is about to run as a Libertarian, just as the one who is arguably the most libertarian of the GOP candidates — Ron Paul — is on the eve of winning the Iowa Caucuses. I think it is safe to speculate that the media will make as much as it can out of a Gary Johnson candidacy in order to help Barack Obama.  Whether a Johnson candidacy as a Libertarian will make a difference in the GOP race or the national election is hard to say, but the following are from some of the major newspapers about this breaking story:

Politico: GaryJjohnson to Drop Out of Gop Primary to Run as Libertarian

Gary Johnson will quit the Republican primaries and seek the Libertarian Party nomination instead, POLITICO has learned.

The former two-term New Mexico governor, whose campaign for the GOP nomination never caught fire, will make the announcement at a press conference in Santa Fe on Dec. 28. Johnson state directors will be informed of his plans on a campaign conference call Tuesday night, a Johnson campaign source told POLITICO.

“He is representing a viewpoint and a viewpoint that needs to be heard and he’s going to do whatever it takes to get that done,” Hunter told The Associated Press.

Johnson is fiscally conservative but supports such liberal causes as legalizing marijuana and abortion rights.

Johnson, who served two terms as New Mexico’s governor, has barely registered in polls. Excluded from all but two of the GOP presidential debates, he has grown frustrated that he hasn’t earned more attention, Hunter said.

Republican presidential contender Ron Paul, who was the Libertarian candidate for president in 1988, was supportive of Johnson’s decision.

“I think competitiveness is good. And somebody to have ideas that are libertarian, I think that is good,” Paul told the AP following a New Hampshire campaign stop Tuesday night. “But I’ve been through it. There’s a lot of frustrations. … (read more)

Johnson’s anti-tax, socially liberal views did not endear him to Republican primary voters, and he’s not included in most recent polls of the field. Excluded from most of the major debates, he’s taken to Twitter to express his views.

During the Iowa debate on Thursday, he tweeted that he agreed with fellow Republican candidate Rep. Ron Paul (Texas).

“Ron Paul is right — but what if he is not nominated? There must be a real libertarian choice next Nov.,” he wrote.