Regnery Publishing, Inc., the nation’s largest and most successful conservative publisher, is pleased to announce that bestselling author and famed economistGeorge Gilder has won the Leonard E. Read Book Award for his latest book, Knowledge and Power(Regnery, June 2013). The prize is awarded by FreedomFest—the world’s largest gathering of free minds—to the “libertarian book of the year” which best advances the principles of liberty.

“There’s nothing more gratifying than having people you deeply respect respond with excitement to your ideas,” said Mr. Gilder. “Knowledge and Power addresses freedom on a completely new level, not only as a condition of enterprise but also as the measure of information and creativity. I’m thrilled that these experts and champions of freedom appreciate this new contribution from information theory.”

Recently, Kevin Price, Publisher and Editor in Chief of USDR, Host of the Price of Business Talk Show in Houston, Texas, had the opportunity to interview Gilder.  Price calls Gilder “one of the most brilliant social philosophers of the past fifty years.  Here is part one and part two of that interview.

Published to great acclaim in June, Knowledge and Power breaks away from the old supply-side model of economics to present a new economic paradigm: the epic conflict between the knowledge of entrepreneurs on one side, and the oppressive control of government on the other. The knowledge of entrepreneurs, and their freedom to share and use that knowledge, are the sparks that our economy needs to gain traction and innovation. 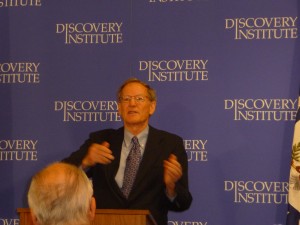 “Knowledge and Power is a revolutionary work in the tradition of Hayek’s famous essay ‘The Use of Knowledge in Society’ and Thomas Sowell’s influential book, Knowledge and Decisions,” states Mark Skousen, economist and producer of FreedomFest. “Gilder makes the argument that decision-makers must reject the deterministic/mechanistic systems of human behavior and build their policies and economic models on the concepts of human creativity, free will and the unexpected.” His entire book is built around his thesis that “the freer an economy is, the more this human diversity of knowledge will be manifested… Capitalism is not chiefly an incentive system but an information system.”

The Leonard E. Read Book Award will be presented to Mr. Gilder at this year’s FreedomFest, July 10–13, 2013, in Las Vegas. The award comes with a gift of a one-ounce American Eagle gold coin, valued at approximately $1,300. For more information on the annual conference, which attracts over 2,000 attendees each year, go tohttp://www.freedomfest.com. (Note: This award is not affiliated with FEE, and the selection of the Read Book Award is exclusively a decision by FreedomFest.)