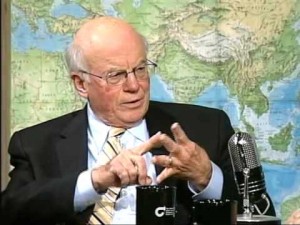 One of the "founders" of the modern conservative movement, Richard Vigurie, likes Rick Santorum.

Richard Vigure may not carry the weight he did in the 1980s as the “godfather of the New Right,” but he is still a man of significant influence and he is putting it behind Rick Santorum.

Upon returning from a meeting in Texas of leaders of the conservative movement hosted by Nancy and Paul Pressler at their ranch outside of Houston, ConservativeHQ ChairmanRichard A. Viguerie issued the following statement endorsing former U.S. Senator Rick Santorum (R-PA) for President:

“Contrary to some media reports of bitterness, suspicion, and acrimony at the meeting, in my 50-plus years in conservative politics at the national level, I have rarely seen a gathering conducted in such a spirit of good will.  While many of the participants came to the meeting strongly, even passionately, committed to one or another candidate, all of us participated in the meeting with the greatest mutual respect and in the prayerful hope for a positive outcome.

“My definition of a positive outcome from the meeting was that the conservative movement would coalesce behind a good candidate.  I went to the meeting supporting former Pennsylvania Senator Rick Santorum, but was prepared to support and work for the consensus candidate, whoever that turned out to be.  The strong support shown for Santorum, whom I have concluded is the most electable conservative seeking the Republican nomination for President, is a positive outcome.

“After two ballots the group had narrowed the field to Santorum and former Speaker of the House Newt Gingrich, with Santorum leading.  On the third and final ballot, a number of Gingrich supporters, in a principled effort to achieve unity, switched their support to Santorum.  This resulted in a strong 75 percent consensus of the group in support of Senator Santorum’s candidacy.

“This was not an anti-anyone meeting.  Everyone there was united in their commitment to find the best candidate to defeatBarack Obama.  We are long past trying to find the perfect candidate who achieves 100 percent on every conservative scorecard.  Each of the major Republican candidates had their articulate advocates, but after the third ballot, it was clear that there was a strong consensus behind Santorum.

“The group consensus was based on Senator Santorum’s character, his principled stands on the issues of life, family, and the conservative agenda in general — and most importantly on his judgment.  I urge you to join me in supporting Rick Santorum as the most electable conservative in the race for the Republican nomination for President.”

According to a ConservativeHQ statement, “Richard A. Viguerie pioneered political direct mail and has been called “one of the creators of the modern conservative movement” (The Nation) and one of the “conservatives of the century”(Washington Times).  He is the author ofConservatives Betrayed: How George W. Bush and Other Big Government Republicans Hijacked the Conservative Cause.”