On behalf of thousands of Iranian-Americans whose loved ones are in camps Ashraf and Liberty in Iraq, the US Committee for Camp Ashraf Residents (USCCAR) “strongly condemns the mounting pressure exerted on the 3,200 Iranian dissidents in Iraq by UN Secretary-General’s Special Representative, Martin Kobler,” according to an organization statement.

His actions and words have only served the murderous regime in Iran and the Nuri al-Maliki government in Iraq, which has been doing the bidding of Tehran. 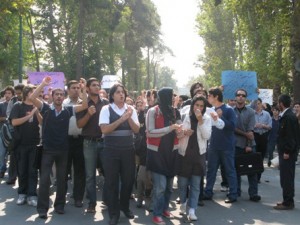 The United Nations High Commissioner for Refugees (UNHCR) has formally recognized the residents of Ashraf as “asylum seekers” and “persons of concern,” which entitles them to fundamental humanitarian protections and freedom of movement.

Since February 2012, some 2,000 residents of Camp Ashraf – home for the past 26 years to thousands of members of Iran’s principal opposition group, the People’s Mojahedin Organization of Iran (PMOI/MEK) – have relocated to a tiny section of an abandoned facility euphemistically called Camp Liberty near Baghdad airport. They did so even though minimum guarantees for their safety and security have yet to be provided by the Iraqi Government or the UN.

In a June 11, 2012 statement, Mr. Kobler again “turned a blind eye to the Iraqi Government’s egregious breach of the December 25, 2011 Memorandum of Understanding (MoU) and the systematic violation of the rights of  the residents of camps Ashraf and Liberty,” according to a statement. It goes on, “he implicitly blamed the residents for the stalled relocation process.” “I urge the remaining residents of Camp Ashraf to relocate to Camp [Liberty] without delay,” he said.  In an oft-repeated and thinly-veiled threat, Kobler warned “there will be violence if the relocation doesn’t recommence.”

Mr. Kobler failed to state that the Iraqi Government is the “responsible party for stalling the relocation process by denying residents their basic needs in Liberty. There are serious shortages of water and electricity and residents have not been allowed to take their property from Ashraf. Nor do they enjoy any freedom of movement.”

Mr. Kobler has yet to explain, four months on, why not even a single resident of Camp Liberty has been resettled in third countries through the UN and why he has not sought UN’s intervention to hold al-Maliki accountable for his flagrant breaches of the very MoU his government has signed with the UN.

Neither has he ever explained why he has not compelled the Iraqi Government to allow visits by the residents’ families and lawyers.  Instead, he has spent time in Tehran, where he visited with operatives of Iran’s notorious Ministry of Intelligence and Security who discussed ways of coercing the residents to capitulate to the Iranian regime.

The US Committee for Camp Ashraf Residents calls on the UN and the United States to act immediately to alleviate the humanitarian crisis brewing in Liberty Prison by demanding that the al-Maliki Government upholds its commitments to the residents and refrain from any violence.