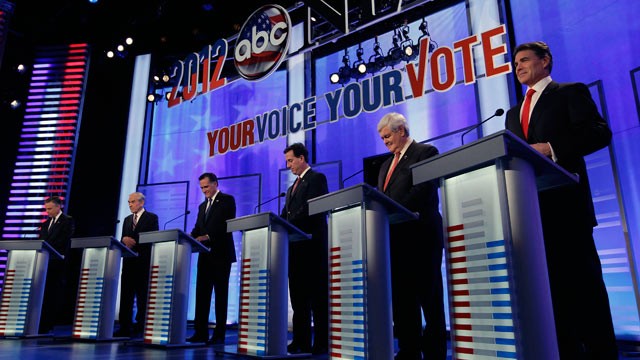 As Republicans, we espouse the values and principles which made America great. We not only enjoy America being a beacon of hope and liberty to the world, we believe that the American Dream and the U.S. Constitution must be protected at the very cost of our lives, our fortunes and our sacred honor. There are many values and principles that make up those two precious American ideals, but three of them seem to be under attack in the GOP primary race.

Mitt Romney is the frontrunner, and as such, he has a big ol’ political bullseye on his forehead. However, I find myself quite disconcerted, and certainly disappointed, that the runners-up are attacking the very things that make America great. Let’s break it down and see what is happening in the race to be the next president of the United States of America.

: continued effort to do or achieve something despite difficulties, failure, or opposition : the action or condition or an instance of persevering : steadfastness.

But apparently this quality is now fodder for attacks on Mitt Romney as Newt Gingrich berates him for not giving up while running for office. In the past, as recently as five minutes ago, perseverance was not only a positive quality, it was one to cultivate in one’s self. But now it is a hiss and a byword as the runners-up jump on the bandwagon to try and bring Romney down by vilifying a quality we used to seek after. Perhaps Mr. Gingrich should look to the name he evokes so often, Ronald Reagan, because Mitt Romney merely employed the tactics used by Ronald Reagan when he won the presidency.

But let’s not dwell on that, let’s move on to capitalism, the very foundation of the business side of our nation. Going back to Merriam Webster, we find that capitalism is defined as:

Free enterprise is what took this nation to the top as a super power. Capitalism is driven by private industry, not the federal government. And what happens when the federal government expands beyond its enumerated powers and responsibilities in Article 1, Section 8 of the U.S. Constitution? Free enterprise is slowly being choked off and replaced by government jobs, and what’s happened to our economy? It’s almost to its knees as debt and expenditures rise to critical levels and threaten to destroy what was once one of the strongest economies in the world. And yet Gingrich and the others attack Mitt Romney because of his time at Bain Capital, choosing to overlook the hundreds of successful companies and focusing only on a handful of failures. So apparently, capitalism is now a swearword to the GOP runners up.

And what is the next American ideal on the GOP presidential candidate chopping block? Oh yes, freedom to choose one’s healthcare provider, in this case, insurance company. Mitt Romney said he “loves to fire people who do not provide the quality services he’s paying for,” in the middle of a paragraph on insurance companies. Freedom to choose is one of the foundational principles of America, and yet, the GOP runners up have chosen to toss that onto the guillotine of government overreach, just to take Mitt Romney down.

Is it worth the vote to attack a candidate on perseverance, capitalism and freedom of choice in healthcare providers? Because that is what the Republican candidates are doing to Mitt Romney. What did I say about not poisoning the well? These campaigns need to sit back, reassess, and consider if they are further eroding the greatness of America for personal gain.