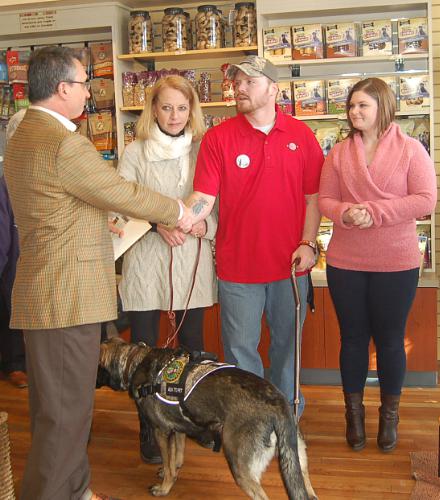 Garrison, 28, was an automatic logistical specialist and was deployed to Afghanistan between 2006 and 2007. He suffered a Traumatic Brain Injury (TBI), significant hearing loss and Post Traumatic Stress Disorder (PTSD). Taz, a two-year-old Austrian Shepherd, was trained to provide Garrison with both daily assistance and companionship upon  command.

“I met Paul Chapa, the founder of F.I.S.H. and we started talking about what F.I.S.H. does for returning veterans,” Garrison says. “Then I was surprised to hear from Paul that I would be the recipient of the Three Dog Bakery Veteran’s Day promotion just before my 29th  birthday!”

Three Dog Bakery raised $5,000 via a percentage of its sales from its growing global bakery franchise network, grocery, mass and pet specialty retail outlets and threedog.com. Three Dog Bakery presented a check to F.I.S.H. – Food Industry Serving Heroes – which paid for training two service dogs. Garrison is the first recipient of the donation, and he will receive a year’s supply of Three Dog Bakery food and  treats.

Approximately 21 percent of U.S. veterans from Iraq and Afghanistan conflicts suffer from a service-connected disability. Service dogs perform a multitude of tasks to help veterans with independence in their post-combat life, resulting in significant improvements psychologically, socially and economically. Garrison, who also suffers from vertigo and uses a cane, says Taz will be a valuable addition in his life. Having Taz will help with his balance and to retrieve  items.

“Taz is a highly intelligent and full service dog, able to go everywhere with Brandon, from restaurants to airplanes,” Chapa says. “Brandon is just one of thousands of returning veterans who deserve this type of  support.”

Three Dog Bakery pioneered its annual Veteran’s Day promotion just as it did the canine bakery concept more than 25 years ago – that’s 175 years in dog years! Popular among canines and their owners alike, its products feature a diverse array of premium, all-natural, made in the USA treats and food for those special times in a dog’s or family’s   life.