With Marco Rubio in the Senate (and possibly on the national ticket), and Ted Cruz gaining ground in his US Senate efforts in Texas, now seems like a great time for the GOP to pursue Hispanics. A new Gallop poll may also validate the idea that Hispanics could be poised to move to the GOP column.

A majority of U.S. Hispanics identify as political independents (51%) rather than as Democrats (32%) or Republicans (11%). However, once their partisan leanings are taken into account, most Hispanics affiliate with the Democratic Party (52%) rather than the Republican Party (23%). Both sets of numbers shift more decisively in the Democrats’ favor among the roughly half of U.S. Hispanics who are registered to vote.

These results are based on a USA Today/Gallup poll of 1,753 Hispanics, conducted April 16-May 31.

They confirm a growing trend toward independent political identification among U.S. Hispanics in recent years, surpassing the 50% mark in 2011, according to annual aggregate data from Gallup Daily tracking. This mirrors the recent trend among all U.S. adults.

The plurality of U.S. Hispanics have identified as political independents each year since 2008, with about one in three identifying as Democrats and one in eight as Republicans.

Immigrants Especially Likely to Be Independent

Hispanic immigrants are much more likely than those born in the United States to lack a political party attachment, contributing to the high proportion of political independence among the U.S. Hispanic population in general.

Sixty percent of Hispanic immigrants identify as political independents, compared with 44% of first-generation Hispanic Americans and 43% of second-generation or higher Hispanics. All groups show much greater identification with the Democratic than the Republican Party, though each succeeding generation of Hispanics is more likely to identify as Republican than the prior one.

The percentage of Hispanics who identify as Democrats or lean Democratic is fairly consistent across the generations, ranging from 52% to 56%. Hispanics with longer ties to the United States are more likely to be Republicans and less likely to be non-leaning independents. 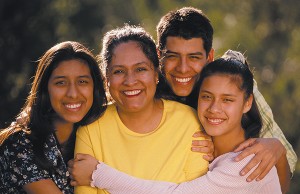 Hispanics as a whole are not highly integrated into the U.S. political system, given that only about half are registered to vote and a majority identify as political independents. This is in large part because of the higher detachment from the political process of Hispanic immigrants who make up roughly half of all U.S. Hispanics, but among whom 25% are registered to vote and 60% identify as political independents.

And Hispanics who are fully integrated into the political process, namely those registered to vote, show even stronger Democratic proclivities.

Thus, while the GOP may make some inroads among Hispanics as they develop deeper American roots in the future, Hispanics are likely to remain a reliable Democratic voting bloc for years to come.