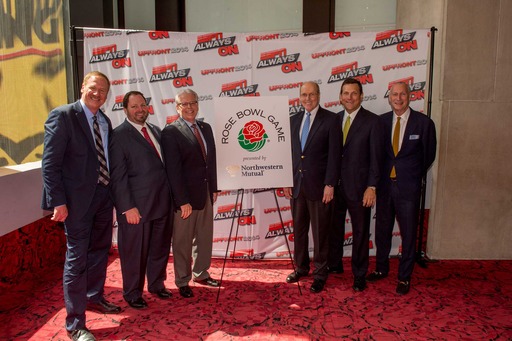 Northwestern Mutual announced today it will become the presenting sponsor of the historic Rose Bowl Game beginning in 2015, as part of an expansive partnership with ESPN. The deal, which runs through 2020, includes positioning across ESPN’s coverage of 23 college sports championships.
“Northwestern Mutual is very proud to become presenting sponsor of the Rose Bowl game. As a company that has helped Americans achieve financial security for nearly 160 years, we have enormous respect for the game’s historic place in college sports,” said John Schlifske, chairman and CEO of Northwestern Mutual. “This sponsorship is a natural fit for our company, because many of our clients and prospects follow college sports and many of Northwestern Mutual’s top financial representatives are former NCAA student-athletes.”Ed Erhardt, president of ESPN Global Customer Marketing and Sales, added, “The Rose Bowl Game is one of the most celebrated events of the year. We look forward to working with Northwestern Mutual in this, the inaugural year of the College Football Playoff, and beyond.”

As part of the presence with the Rose Bowl Game, Northwestern Mutual will be the sponsor when the bowl hosts the College Football Playoff Semifinal in the inaugural year of 2015, as well as in 2018. Northwestern Mutual will be prominently featured on in-stadium signage including the mid-field logo, tickets and uniform patches. The deal also includes commercial inventory throughout the Rose Bowl Game telecast, as well as each of the other “New Year’s Six” Bowls and College Football National Championship.

Overall, Northwestern Mutual-branded content will appear during ESPN’s multiplatform coverage of 23 NCAA championships and throughout the network’s extensive, season-long college football and basketball coverage. The company will also have a strong advertising presence across ESPN’s leading digital properties including mobile, Watch ESPN, as well as exposure throughout ESPN’s year round college football content. “The Rose Bowl Game is excited to partner with Northwestern Mutual as the presenting sponsor of its annual New Year’s day matchup,” said Rich Chinen, 2015 Tournament of Roses President. “As two organizations with deep longevity and strong commitment to the public, the Tournament of Roses Association welcomes the opportunity to enhance the strength and tradition of The Granddaddy of Them All as one of the top collegiate events of the year with such a great organization as Northwestern Mutual.”

Northwestern Mutual became an NCAA Corporate Partner in 2012, and in April announced an arrangement to extend the terms through August 31, 2020. The company’s marquee partnerships portfolio also includes the Men’s and Women’s NCAA Golf Championship on Golf Channel, Forbes and the SEC on CBS.

About Northwestern Mutual
Northwestern Mutual has been helping families and businesses achieve financial security for nearly 160 years. Our financial representatives build relationships with clients through a distinctive planning approach that integrates risk management with wealth accumulation, preservation and distribution. With more than $217 billion in assets, $26 billion in revenues and more than $1.5 trillion worth of life insurance protection in force, Northwestern Mutual delivers financial security to more than 4.2 million people who rely on us for insurance and investment solutions, including life, disability and long-term care insurance; annuities; trust services; mutual funds; and investment advisory products and services.

About the NCAA
The NCAA is a membership-led nonprofit association of colleges and universities committed to supporting academic and athletic opportunities for more than 450,000 student-athletes at more than 1,000 member colleges and universities. Each year, more than 54,000 student-athletes compete in NCAA championships in Divisions I, II and III sports. Visit www.ncaa.org andwww.ncaa.com for more details about the Association, its goals and members and corporate partnerships that help support programs for student-athletes.