Last week the $3.7 trillion municipal bond market was met with the very frightening word – bankruptcy, as the city of Detroit joined the list of cities filing for Chapter 9 protection.  Just as Vallejo, Stockton and San Bernardino in California and Central Falls in Rhode Island experienced, Detroit had just too many years of piling up debt after spending more than it made and promising city employees they could be paid lucrative pensions the city couldn’t afford.  All in, Detroit now owes $18 billion and it’s not even close to being able to pay it.  What does this mean for the bond market, and what does it mean for municipal employees all around the country?

What a sad thing it is to see the once great city of Detroit now feebly working its way through bankruptcy court. A city that once housed the might auto industry and had over two million residents is now a city of only 700,000 and a city with a greatly downsized auto industry.  The causes behind the bankruptcy will be argued by pundits for a long time and will of course never be fully reconciled.  Was it thirty years of government gone wild or was it inevitably caused by the transition from a manufacturing economy to an information economy.  Each of us will have opinions on this and the voices on each side will be loud and proclaim Detroit to be the poster child for their respective argument. 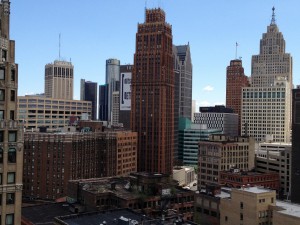 The reality is though, almost regardless of how Detroit or these other cities got into the mess, is that people will be hurt by this; thousands of holders of city bonds, 30,000 municipal workers, 100,000 creditors not to mention the residents of the city.  While Kevyn Orr, the unfortunate fellow brought in to deal with this, has assured city residents that city services will continue unabated, that’s not much consolation as police are already scarce and the city is already dark at night from its inability to fix street lights.  But if we concede the point that current residents will see the world continue as it is (as miserable as that may be) what about municipals workers relying on current jobs or pensions and what about creditors and bond holders?

Unsecured creditors of the city as well as the bond holders will have standard operations take place in this bankruptcy, they won’t get much – sorry.  So the real variable is what happens to the current employees of the city and the retirees who rely on the city’s pensions?  And guess what, that is what the fight will be all about!

The underlying cause beneath the financial dilemma of many cities and some states are the pension plans.  These plans have grown up over decades as the politicians have partnered with the unions to secure elected office.  The negotiation for benefits went something like this; politician “I can’t give you that generous a benefit; the city (state) can’t afford it!” Union official, “If you give us those benefits, I’ll deliver the votes!”  Politician, “I’ll give you the benefit.”   This one sided negotiation has put cities and states throughout this country in financial chaos and has threatened the pensions for millions of municipal workers.  Detroit isn’t alone, if you want to see real problems look at the State of Illinois which may just be the first sovereign state in the United States to seek bankruptcy, if that’s even doable.

Check out recent interviews with Steve Beaman here and here.  Steve offers a unique take on the news of the day.

The bottom line is this, for investors in municipal bonds rates will inch up as a result of this Chapter 9 bankruptcy filing.  Rates won’t skyrocket as analysts will try to determine whether Detroit is in isolation or if it’s the tip of the ice-berg.  This is just one more reason to keep your bond durations short as we see all types of pressure building to drive up interest rates.  The second “bottom line” is that people who work for municipalities around this country need more than ever to quit believing what they’re being told by their leadership.  The pension they’re banking on may not be there when they need them so municipal employees; fire, police, teachers, etc. need to take steps to build a private retirement nest-egg outside of the supposedly guaranteed pension.  Yes this will be tough especially for those pre-retirement folks above 50 but they must begin today putting away all they can.  That way, if their city or state runs into this pension problem, and they will, they won’t be one of the many people standing at the courthouse door saying “what do I do now?”

In the Society’s opinion, Detroit is not alone and many cities and even some states are in a position where the financial burden they’ve built up over decades of political promises will come to haunt them.  While cities have gone bankrupt and emerged sometimes better for it, there has never been a case in which a sovereign state has filed for protection  -legal scholars aren’t even sure that’s possible.  Translated into English, this means that there will be more debt and therefore more tax burden placed upon the taxpayers of the United States as states seek to raise revenues to support their enormous debts; and it is not inconceivable that the federal government will be called upon to support the obligations of the states.

Steve Beaman is the President of the Society for the Advancement of Financial Education. For more information, you can also contact info@USDailyReview.com.