By Suntrust, Special for  USDR

Many higher income households say they are not saving as much as they should, according to a recent SunTrust (NYSE: STI) survey conducted online by Harris Poll among those whose households make $75,000 or more  annually.

Nearly a third of these households live paycheck-to-paycheck at least sometimes and 44 percent agreed that spending on lifestyle purchases – like dining out and entertainment – causes them to save less than they should each month. For millennials with the same household income, that number jumps to 71  percent. 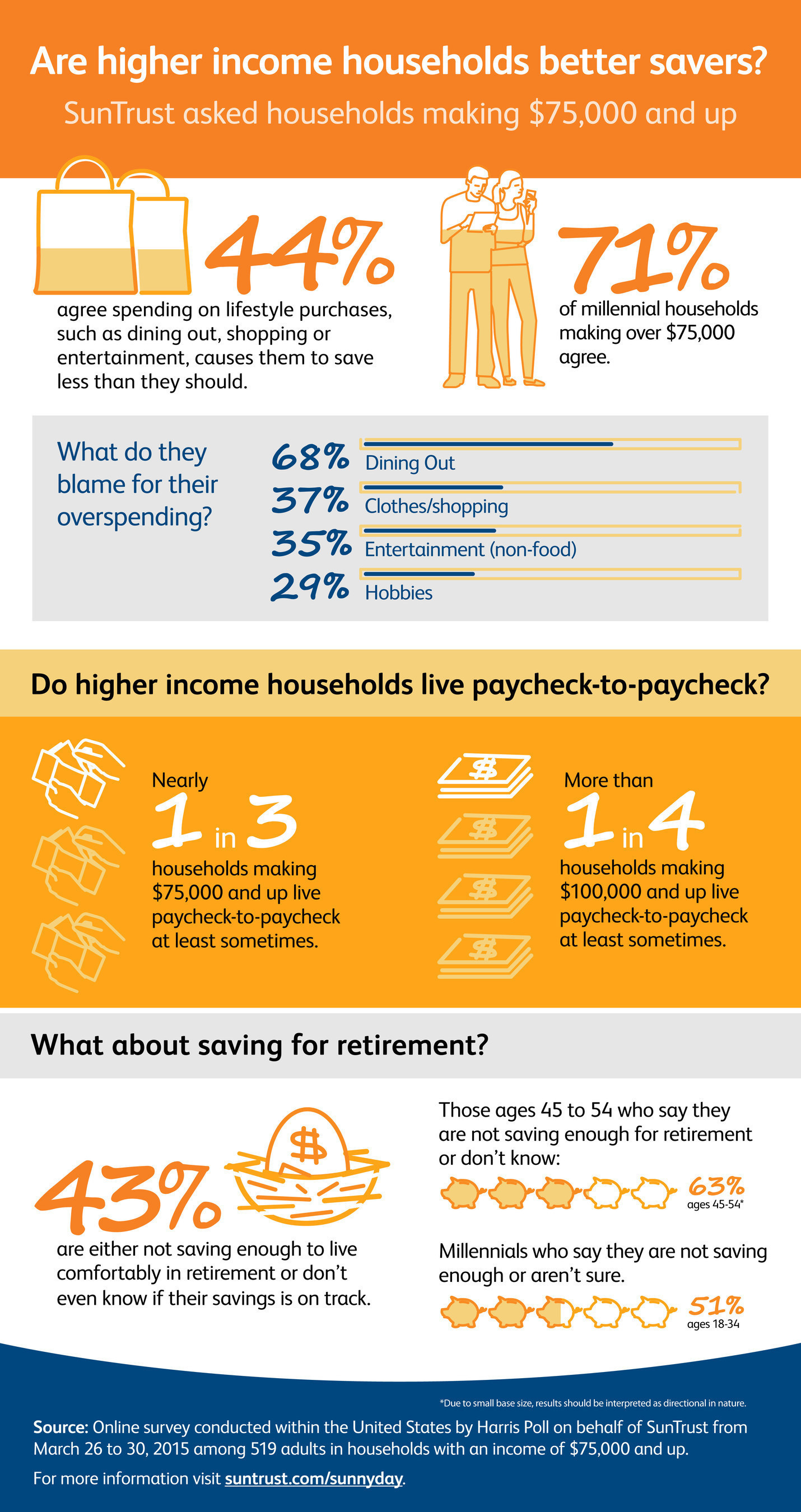 “It’s easier to stay motivated when you’re saving for goals that are connected to your values and bring you happiness,” said Brad Dinsmore, consumer banking and private wealth management executive at SunTrust Bank. “We are providing tangible resources and inspiration to help people put more money aside for their most important moments, whether that’s an upcoming wedding, dream vacation, opening a new business or starting a  family.”

To help people establish strong financial routines so they can live for a sunny day, SunTrust is offering these  tools:

SunTrust is committed to advancing financial well-being for its clients and communities. For additional information, visit  suntrust.com/sunnyday.

Of Americans in households making $75,000 or more  annually:

About SunTrust Banks,  Inc.
SunTrust Banks, Inc., headquartered in Atlanta, is one of the nation’s largest banking organizations, serving a broad range of consumer, commercial, corporate and institutional clients. As of December 31, 2014, SunTrust had total assets of $190.3 billion and total deposits of $140.6 billion. Through its flagship subsidiary, SunTrust Bank, the Company operates an extensive branch and ATM network throughout the high-growth Southeast and Mid-Atlantic states and a full array of technology-based, 24-hour delivery channels. The company also serves clients in selected markets nationally. Its primary businesses include deposit, credit, trust and investment services. Through its various subsidiaries, the company provides mortgage banking, asset management, securities brokerage, and capital market services. SunTrust’s Internet address is  suntrust.com.

Survey Methodology
This survey was conducted online within the United States by Harris Poll on behalf of SunTrust from March 26-30, 2015 among 519 adults ages 18 and older in households with an annual income of $75,000 or more. This online survey is not based on a probability sample and therefore no estimate of theoretical sampling error can be calculated. For complete survey methodology, including weighting variables, please contact  suzanne.vincent@suntrust.com.