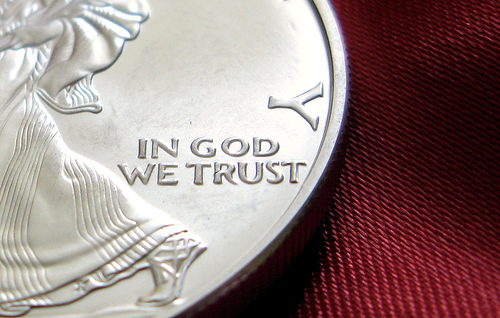 The American Center for Law and Justice (ACLJ) – which represented 41 members of Congress and nearly 90,000 Americans in an amicus brief– today called a federal district court decision dismissing a lawsuit aimed at removing the national motto – “In God, We Trust” – from U.S. currency and coins a “welcomed and well-reasoned” decision.A federal district court issued an order on September 9th dismissing a federal lawsuit and soundly rejecting arguments made by Dr. Michael Newdow and the Freedom From Religion Foundation that the national motto on our currency violates the Establishment Clause of the First Amendment.

The court noted there is an ample body of case law that can support only one conclusion: “the inclusion of the motto on U.S. currency . . . does not violate the Establishment Clause.”

“The decision is welcomed and well-reasoned,” said Jay Sekulow, Chief Counsel of the ACLJ. “Time after time, flawed legal challenges like this one are brought by atheists. And time after time, the courts soundly reject their attempts to change the historical and cultural landscape of America. In our amicus brief on behalf of members of Congress and nearly 90,000 Americans, we argued that the national motto poses no constitutional violations and must be dismissed. We’re extremely pleased that the court did just that.”

In the amicus brief filed in May, which is posted here, the ACLJ argued that the national motto reflects the historical fact that this nation was founded upon a belief in God. Further, the brief contends that the First Amendment does not compel the redaction of all references to God just to suit atheistic preferences.

The brief stated: “The national motto simply echoes the principle found in the Declaration of Independence that our freedoms come from God and not the state. The national motto was adopted for the express purpose of reaffirming America’s unique understanding of this truth. . . . The Establishment Clause was never intended as a guarantee that a person will not be exposed to religion or religious symbols on public property, and the Supreme Court has rejected previous attempts to eradicate all symbols of this country’s religious heritage from the public’s view.”

In an order issued on September 9th, U.S. District Court Judge Harold Baer, Jr. dismissed the suit and agreed with the ACLJ’s arguments: “The Supreme Court has repeatedly assumed the motto’s secular purpose and effect, and all circuit courts that have considered this issue – namely the Ninth, Fifth, Tenth, and D.C. Circuit – have found no constitutional violation in the motto’s inclusion on currency,” the court concluded.

The court further determined that the claims made by the plaintiffs “are not violative of constitutional guarantees” and concluded that while the plaintiffs “may be inconvenienced or offended by the appearance of the motto on currency, these burdens are a far cry from the coercion, penalty, or denial of benefits required under the ‘substantial burden’ standard” required by the Free Exercise Clause of the First Amendment and the Religious Freedom Restoration Act (RFRA).

The brief also represented the ACLJ’s Committee to Protect the National Motto which consists of 87,500 Americans who oppose the lawsuit challenging the national motto. Also represented in the brief, the American Catholic Lawyers Association (ACLA) – a Catholic religious organization that engages in public interest litigation and public discourse and debate on issues related to the religious liberty of Catholics and the proper role of religion in civil society.

Led by Chief Counsel Jay Sekulow, the American Center for Law and Justice (ACLJ) is dedicated to the defense of constitutional liberties secured by law and is based in Washington, D.C.  The ACLJ is online at www.aclj.org.