It’s hard to deny the bald eagle’s importance in American history and particularly fitting to remember its legacy as we prepare to celebrate America’s lasting independence on the Fourth of July, according to officials with the Pennsylvania Game Commission.

Today, the bald eagle is thriving in Pennsylvania. Its population in Pennsylvania hasn’t been stronger in more than a century. As recently as 30 years ago, the Commonwealth’s nesting population was three pairs. 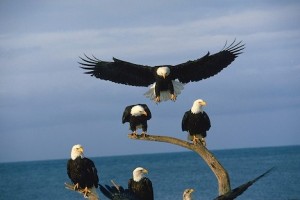 Before addressing the bald eagle’s latest gains in Pennsylvania, let’s reflect on its past. Two hundred years and about two weeks ago, the United States declared war on England and America plunged into the War of 1812. Over the next two and a half years, more than 29,000 Pennsylvanians fought in this war. The spirit and occasionally the image of the nation’s relatively new symbol – selected only 30 years earlier in 1782 – the bald eagle, accompanied them into battle. It was the bald eagle’s first war as the nation’s symbol.

“The bald eagle’s presence in American history and this country’s efforts to protect it are legendary,” said Carl G. Roe, Game Commission executive director. “Long recognized as the spirit of American freedom and resolve, this magnificent raptor is a lasting example of the good that can come from environmental reform and modern wildlife conservation. There’s no better story to tell and retell every Fourth of July than the dramatic recovery of the bald eagle in Pennsylvania and America.

“The company of eagles in Pennsylvania’s more remote areas – even the fringes of urban areas – creates excitement for countless residents and visitors. I’ve become so accustomed to seeing them now, that I can’t imagine our outdoors without them. Their presence heightens every trip afield and a chance encounter with a passing bald eagle is almost always the highlight of anyone’s day. Eagles simply are that unforgettable!”

The preliminary number of bald eagle nests in Pennsylvania is 206 in 51 of the state’s 67 counties, a number that is expected to increase as nesting reports are submitted. In 2011, the preliminary report was 203 nests in 50 counties, but the final number ended up being 217.  In 2010, the late-June nest count was 192; but that number increased to 199 by the end of the year. In 2009, the June nest count was at least 170; it increased by four by the end of the year.

“It’s hard to find adjectives to adequately describe the recovery of the state’s bald eagle population,” said Patti Barber, Game Commission Wildlife Diversity Division biologist. “Their resiliency to hang on to the nesting territory they’ve established and their tenacity to expand into the peripheral areas of existing range has really surprised us.

“That’s not to say that we didn’t expect them to expand into unoccupied areas. Rather, we hoped the populations would grow in pairs or expand across the state this quickly, but we thought it would be a somewhat slower or gradual expansion. Eagles have been expanding their range in this state annually at a considerable pace.”

The continuing increase of bald eagle nests throughout the state has been challenging for the Game Commission to keep up with in recent years. The nests are usually in out-of-the-way locations that often can be accessed only by traversing tough terrain or with a boat. As a result, monitoring and protecting nests can be an issue. It’s one in which the Game Commission counts on others to help it.

“The truth is it is difficult to make a ‘hard and fast’ rule about eagle safe distances in which it is safe to approach eagle nests without disturbing them, which is illegal under the federal Bald and Golden Eagle Protection Act,” Barber said. “The Act doesn’t list a distance. Some pairs are tolerant of human activity, while others are sensitive.  Their reaction often depends on the activity and approach of the individual, the nesting cycle stage, and if the eagles are used to seeing people.

“Where there is regular public access and established viewing areas, some pairs can be very tolerant if visitors are predictable and nonthreatening.  But when someone sneaks to the base of a nest tree, most eagles become alarmed.”

To ensure calm, the Game Commission posts signage around nest sites likely to be disturbed by people. Disregarding these signs is a violation of state and federal laws.

“Anyone watching a nest with or without signage should behave in the best interest of the nesting pair and its eggs or eaglets,” Barber said. “Failure to keep your distance could cause eagles to abandon their eggs or young, or force young birds to jump from the safety of the nest with no way to return. For the sake of eagles, use you binoculars or a spotting scope. They are after all, still on the comeback trail from being an endangered species.”

For more information, check out the Game Commission’s “Bald Eagle Watching in Pennsylvania,” which can be accessed from the agency’s homepage (www.pgc.state.pa.us).  On this page, you will find “Bald Eagle Nest Etiquette” tips, as well as information on where-to-go to see bald eagles in every region of the state, helpful tips on how to distinguish bald eagles from other flying birds, historical background and nesting behavior observations.

People who find bald eagle nests – among the largest of all birds – are asked to report their findings to the Game Commission. The easiest way to contact the agency is through its public comments email address: pgccomments@pa.gov. Use the words “Eagle Nest Information” in the subject field.

The Game Commission currently classifies the bald eagle as a threatened species in Pennsylvania. They were removed from the federal endangered species list by the U.S. Fish and Wildlife Service in 2007, because delisting goals had been achieved. To view the agency’s bald eagle management plan, go to the agency’s website (www.pgc.state.pa.us), click on “Wildlife” in the menu bar under the banner and then choose “Bald Eagle Management Plan” in the “Wild Birds and Birding” section.

In 1983, the Game Commission began a seven-year bald eagle restoration program in which the agency sent employees to Saskatchewan to obtain eaglets from wilderness nests. The Richard King Mellon Foundation of Pittsburgh and the federal Endangered Species Fund provided financial assistance for this effort. In all, 88 bald eaglets from Canada were released from sites at Dauphin County’s Haldeman Island and Pike County’s Shohola Falls. The resurgence of eagles in Pennsylvania is directly related to this program, which also was carried out in other states in the Northeast.