With more than 2,000 franchisees actively searching for locations, the SUBWAY® sandwich chain has aggressive growth plans for 2012.

According to an article in the Wall Street Journal, the Subway franchise system is the world’s largest restaurant chain, in terms of number of locations. In order to reach the company’s development goals, a contingent of company representatives will be manning the Subway booth at the ICSC RECon convention later this month in Las Vegas. 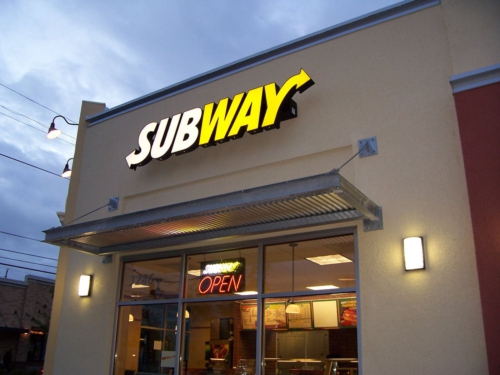 “To continue to provide career opportunities to entrepreneurs and offer our world famous submarine sandwiches, which includes a wide range of healthier meal options, to an ever increasing consumer base, more than 100 Subway developers, field staff and leasing specialists from all across North America will be attending the event,” says Chris Kan, Training and Business Promotion Specialist for Subway Real Estate, LLC. “We will be looking for sites and ready to make deals.”

The chain is growing and continues to forge ahead with new opportunities in traditional shopping centers, mall and free standing locations as well as non-traditional venues such as hospitals, colleges, sports arenas and airports. Since this past January, the chain has opened nearly 900 new stores in 58 countries, 42 U.S. states and 7 Canadian provinces, which equates to more than one million square feet of prime commercial retail space. In total, the company franchisees lease more than 43 million square feet of property around the globe.

Most recently, the Subway chain reached the milestones of 25,000 U.S. locations and restaurants open in 100 countries.

From 100 to 5,000 square feet, Subway restaurants come in all shapes and sizes. Because of the chain’s unique business model, which has minimal equipment and space requirements, a Subway restaurant can operate just about anywhere.

To illustrate how flexible the Subway concept is, unique locations include an automobile assembly plant in Ohio; a new car showroom, and a brewery in California; a church in upstate New York; a combination laundry and tanning salon in Wisconsin; several high schools in Virginia; and a floating restaurant aboard a river boat in Germany.

According to a statement, “Headquartered in Milford, Connecticut, and with regional offices in Amsterdam, Beirut, Brisbane, Miami and Singapore, the Subway chain was co-founded by Fred DeLuca and Dr. Peter Buck in 1965. Their partnership, which continues today, marked the beginning of a remarkable journey — one that has made it possible for thousands of individuals to build and succeed in their own business. In the 2011 Zagat® Fast Food Survey, the Subway brand was ranked “number one” by consumers in the “Most Popular,” “Top Service” and “Healthy Options” categories for food brands with 5,000 or more locations.”