In a White House statement that conveys that the President is listening to business, the Obama Administration made a laundry list of things they are doing to make Obamacare better.  Of course, virtually every survey by business owners has shown an overwhelming opposition to the government healthcare program, but that will be a topic of a different article.  One of the items on the list, mentioned both casually and passing, was a delay in business compliance, stating “As we make these changes, we believe we need to give employers more time to comply with the new rules. Since employer responsibility payments can only be assessed based on this new reporting, payments won’t be collected for 2014. This allows employers the time to test the new reporting systems and make any necessary adaptations to their health benefits while staying the course toward making health coverage more affordable and accessible for their workers.” 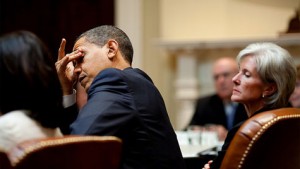 Conventional wisdom among political watchers — both conservative and liberal — is that Obama is afraid that if this is an issue going into the 2014 elections, the Congress will find itself even more hostile to the President’s objectives than it is currently.

Texas Congressman Kevin Brady (R-TX), leader of the Ways and Means Health Subcommittee, added an other perspective, saying “This is the second embarrassing failure by the White House to have a major provision of ObamaCare ready on schedule.  The small business exchanges were postponed earlier; now the business mandate is proving unworkable.  The bottom line: with the lives of Americans on the line, clearly ObamaCare is in disarray and the White House is not competent to administer its own massive government takeover of health care.”

Afraid or incompetent? Neither one bodes well for an Administration that is fighting for its life after the worst series of scandals any president has faced since Watergate.