Solar streetlights are being installed throughout Haiti as part of an innovative program that aims to catalyze the decentralization of government services. The Minister of Interior and the Collectivities, Thierry Mayard Paul, has launched a program to mount lights in towns such as Leogane, St Marc, Miragoane, and Ft. Liberte that will soon expand throughout Haiti. Under the auspices of Katye Pam Poze (My Neighborhood is Calm), the installation has brought light for the first time to town squares, marketplaces and streets in a country where most citizens have no regular access to electricity. 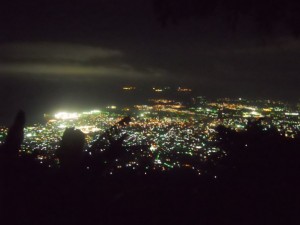 Minister Mayard Paul says that the Katye Pam Poze program “aims to improve the living conditions of thousands of Haitians through simple, inexpensive measures. My intention is to continue until the town squares in at least one city in each of Haiti’s ten departments are lit at night.”

Haiti suffers from the lowest coverage in the Western Hemisphere where barely 12.5% of the population has regular access to electricity. The country has an installed capacity of only 270 watts and nearly all of it is generated by three large thermal plants. Alternative energy sources in Haiti have been contemplated for several years and more so following the January 12, 2010 earthquake.

Citizens in the towns where the lights were installed claim that they feel much safer at night. A man in Leogane whose motorcycle broke down on the very night the lamps were being installed said, “thanks to the lights the mechanics were able to work very late to fix my bike in a zone that was long considered very unsafe.”

Local officials are also pleased with the arrival of the lamps.  According to Alexis Santos, the Mayor Leogane, “the lights allow residents to frequent areas that they had rarely visited at night because they were so unsafe.”

Haiti is not alone, similar solar lighting projects are being tried the world over.  In India the government has installed solar lamps in 54 villages throughout the country.  More recently the Mexican government installed solar lamps just in time for a major international gathering.  Solar lamps have proven to be an effective way to respond quickly to citizens who have both energy and safety issues affecting their quality of life.