Michael Johnson, 19, is competing this year in The Cooper Tires USF2000 Championship Powered by Mazda, the first step on the Road to Indy, an open-wheeled development program for drivers seeking a professional racing career. Johnson’s goal is to be the first paralyzed driver to compete in the Indy500. 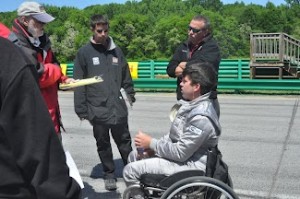 With modifications to his car and the use of medical devices, Johnson is able to compete at the professional level. One of those devices is Coloplast’s SpeediCath® coated catheter providing hygienic, convenient catheterization. Coloplast is a sponsor of Michael Johnson’s car.

“Coloplast’s mission is to improve patient quality of life. Michael Johnson embodies that mission. He is redefining the sport and erasing boundaries, proving that with the right mix of innovation and passion, any obstacle can be overcome,” said Tom Remmel, SpeediCath Product Manager. “We are proud to be part of this racing team and will be cheering for Michael every step of the way, especially when he crosses the finish line at Indy500 for the first time.”

Coloplast’s sponsorship provides financial support for Michael Johnson racing. Coloplast and SpeediCath logos will be displayed on Johnson’s car and gear throughout the season.

“I sincerely appreciate Coloplast’s support in pursuing my dream,” Johnson said. “Their sponsorship fuels my team’s aim to advance to the IndyCar series, and SpeediCath gives me the convenience and freedom to focus on my training.”

A Lifelong Desire For Competition

In 2005, Johnson was a 14-time motorcycle-racing champion. He became paralyzed from mid-chest down after spinal cord injuries suffered in a dirt-track competition.

Despite having no feeling in his legs, Johnson never gave up his desire to race competitively. His experience using his hands to apply throttle, brake and clutch in motorcycle racing paid off in the years following his paralyzing accident. He racked up numerous wins in go-kart competitions, driving specially-designed vehicles with hand controls instead of foot pedals.

Johnson’s adult stem cell surgery in 2009, followed by aggressive physical therapy, stimulated some sensation, and gave Johnson the confidence to race formula cars professionally on tracks throughout the U.S. this year.

“My goal is to become the first paralyzed driver to win the Indy500,” Johnson said. “My journey may seem unconventional, but we all have different paths to reach our potential and live life to the fullest. I might have some challenges here or there but I’m never going to give up. Racing is my life.”

Learn more at www.MichaelJohnsonRacing.com or through this video.