The definition from Webster’s Dictionary says that integrity is “a firm adherence to a code of especially moral or artistic values : incorruptibility.”

Do politicians or political pundits know this?

I will readily admit that I am a conservative and most often if not always vote Republican. I can also admit when one of “our guys” screws up. 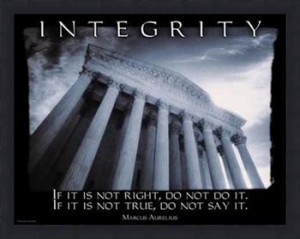 I was so disappointed in Governor Mark Sanford (for one example). I liked him so much. I thought he was intelligent and could communicate his point so that the average Joe got what he was talking about. But if asked, I would have told you what an idiot he was.

Anytime a politician messes up, everyone – party included – should admit their mistakes. This is not a bad thing. It actually could be a learning experience. When we just ignore the problem or errors because we don’t want to break the ranks, we are not being strong we are actually being weak. Strong people can admit when they miss “it”.

When I watch the main stream media or Democrat pundits on television or hear them on the radio, I seriously wonder how they can so adamantly defend the President. And it isn’t just on small issues that maybe the President doesn’t deserve all the blame for, but when they cannot even express a negative or see a negative in anything he does, well that is just ridiculous.

One thing for sure is I am tired of ALL politicians who profess to want to save our economy and love our country and won’t vote on, much less consider or bring to committee to vote on cutting their own salaries or benefits.

If it doesn’t make sense for unions to promise life long benefits to its participants it is even more ridiculous that we do it for politicians – people we vote into office. Our Founding Fathers did not plan that serving in office would end up being a career but intended it to be a service to this country and its communities.

Why are we paying for healthcare for politicians after they leave office? Why do they make more than average citizens? For most people, healthcare does not follow them once they retire. Politicians get enough benefits that their salaries should not be so extreme. Most of these people had high paying jobs when they were in the private sector so once they leave office they could resume their occupations. They also can make money writing books and at speaking engagements. Don’t get me wrong I don’t begrudge anyone making money and lots of it, I begrudge the fact that some once in office think they are above the citizens and think they are deserving of “butt kissing” and can make laws and rules but that they don’t apply to them.

Where is your integrity to truly try and clean up the mess that essentially can be laid upon your shoulders for all the spending that you have done – some more than others.

Have a backbone and stand up for your beliefs no matter public perception. If it is going to help our economy and help in the long run – do it. Scott Walker is a good example of a politician that was doing the best thing he could do for his state. He got a lot of flak and could have lost his job, but he stood by what he thought was best for the state and was rewarded for his integrity.

If you truly love America, you would do whatever it takes to bring her back to prosperity, no matter if it costs you being re-elected, or the praise from your “party”.