By Andrew Bostom, Special for  USDR

Expatriate Iranian journalist Amir Taheri has written an intriguing — and essential — “linguistic” analysis comparing the various diplomatic “framework” statements at the conclusion of the latest round of the deadline-challenged Iranian nuclear negotiations. The discordances range from nuanced but important grammatical differences in how the Persian text delineates Iranian versus U.S. responsibilities, to the Persian and U.S. texts being “diametrically  opposed.” 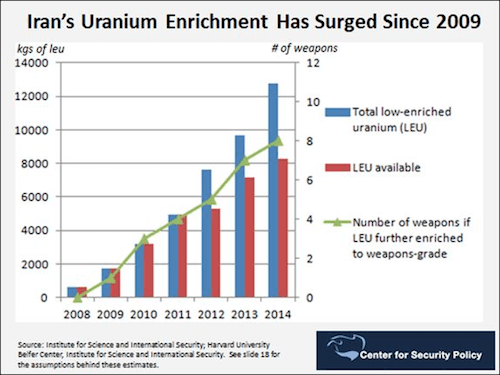 It is these latter starkly contrasting representations that merit elaboration. As Taheri  describes:
The U.S. declaration maintains Iran has consented not to use advanced centrifuges (i.e., the IR-2m centrifuges, which, as nuclear weapons non-proliferation expert Olli Heinonen has reported, are operated in Iranian hands at about seven times the capacity of the older generation IR-1 centrifuges). The Iranian text asserts that “on the basis of solutions found, work on advanced centrifuges (ostensibly, even faster than the IR-2ms) shall continue on the basis of a 10-year  plan.”
Despite the American text’s claim that Iran will dismantle the core of the heavy water, plutonium-generating reactor in Arak, the Iranian text states, in 180-degree opposition, the facility will not only be kept intact but will undergo updating and  modernization.
Notwithstanding U.S. assertions that “the Iranian nuclear project and its military-industrial offshoots would be put under a kind of international tutelage for 10, 15 or even 25 years,” this alleged timeline — and oversight — are absent from the Persian, as well as the Italian and French text summaries of the “framework” agreement.
While the U.S. articulates a phased process of sanctions “relief,” Iran insists the sanctions would be “immediately terminated” upon announcement of a final  accord.
The U.S. text even avers, albeit “in an oblique reference,” to Iran’s joint nuclear weaponization/missile delivery development programs with North Korea, that Tehran has somehow “agreed to take measures to reassure the international community” on these military aspects of its nuclear project. But, “there is absolutely no echo of that in the Iranian and other non-American  texts.”
Former CIA analyst Fred Fleitz has chronicled (see slide below) Iran’s burgeoning accumulation of low-level enriched uranium (LEU) on the Obama administration’s watch, since 2009 — enough to produce eight to eleven nuclear  weapons.

Fleitz shares Taheri’s well-characterized concerns about the “framework agreement,” riveting on the continued failure to address Iran’s past weapons experimentation under the aegis of its military, as well as the inadequate verification program (since Iran categorically rejects both unannounced inspections at known facilities, and inspections at potential clandestine, i.e., military facilities) going  forward:

If Iran’s enriched-uranium stockpile remains in the country and is only reduced to powder, Iran will retain the capability to make eight or more nuclear weapons in about three months. Former IAEA deputy director Olli Heinonen recently published a chart (below) on Iran’s nuclear “breakout” time that shows how Iran could make enough enriched uranium for one weapon in twelve weeks from reactor-grade uranium using 6,000 centrifuges, and how it could do so in 16 weeks using only 1,000  centrifuges.

The current dangerously destabilizing Iranian nuclear negotiations morass was foreshadowed in the immediate aftermath of the initial interim agreement announcement of November, 2013. During an interview which aired December 11, 2013, Iranian Middle East analyst Mohammad Sadeq al-Hosseini — known for his advisory role to “moderate” former Iranian President Khatami — provided a candid assessment of the negotiations, vis-à-vis the doctrine of jihad, and jihad-related deception, as a tactic. El-Hosseini  noted:

Incidentally, for your information, when you conduct political negotiations with Iran, you lose even when you think you have won. The [Iranians] have raised the level of uranium enrichment far beyond the level they really needed, so that when the level would be lowered, they would emerge  victorious.

Obama had to make a great retreat. He was forced to accept a handshake from President Rouhani [Rouhani], whom he considered a kind of Gorbachev or Sadat, so that the day would not come when he would be forced to kiss the hands of [Secretary General of Lebanese Hezbollah] Hassan Nasrallah and [Supreme Leader of Iran] Imam Khamenei, so that they would hold their fire in the great war that was prepared to annihilate  Israel.

Far more corrosive than this religiously sanctioned Islamic dissimulation, or takiya, a respected aspect of the jihad war doctrine (enunciated by Islam’s prophet Muhammad, in anticipating the jihad conquest of Christian Byzantium, and Zoroastrian Persia, as “War is deceit”), is the self-delusive mindset of our diplomatic leadership, epitomized by Secretary of State John Kerry. Kerry opined in early September,  2014:

The real face of Islam is a peaceful religion based on the dignity of all human  beings.

Almost five months later, on January 23, 2015, Kerry upheld, as alleged Sunni and Shiite Islamic ecumenical role models, the late King Abdullah of Saudi Arabia, and Ayatollah Sistani of Iraq. Kerry’s romanticized allusions to these Muslim political and religious leaders do not withstand the barest scrutiny. The ideology and practices of Abdullah’s totalitarian Sunni theocracy, as well as Sistani’s worldview, and the behaviors of his Shiite followers, confirm their “successful” promulgation of traditional jihadism and infidel-hatred, Sistani championing the particularly odious Shiite doctrine of najis, which dehumanizes non-Muslims as physically and spiritually  “unclean.”

John Quincy Adams, a seminal architect of U.S. foreign policy as secretary of State and president, possessed remarkably clear, uncompromised understandings of Islam that apparently cannot penetrate the ignorant hubris of his distant successor, John Kerry. Essays Adams wrote while he was in retirement, before his election to Congress in 1830 (Chapters X-XIV, pp. 267-402, in The American Annual Register for 1827-28-29, New York, 1830), succinctly elucidated the permanent Islamic institutions of jihad war and dhimmitude, the latter being the deliberately humiliating imposition of Islamic law on those non-Muslims, who survived their jihad conquest. Regarding jihad, Adams states in his essay  series:

… he [Muhammad] declared undistinguishing and exterminating war, as a part of his religion, against all the rest of mankind … The precept of the Koran is, perpetual war against all who deny, that Mahomet is the prophet of  God.

And Adams captured the essential condition imposed upon the non-Muslim dhimmi “tributaries” subjugated by jihad, with this laconic  statement:

The vanquished may purchase their lives, by the payment of  tribute.

This appeal [citing a prototypical 19th century Ottoman Muslim Sultan’s edict to his Muslim votaries] to the natural hatred of the Mussulmen [Muslim] towards the infidels, is in just accordance with the precepts of the Koran.…The funda­mental doctrine of the Christian religion, is the extirpation of hatred from the human heart. It forbids the exercise of it, even towards enemies. There is no denomina­tion of Christians, which denies or misunderstands this doctrine. All understand it alike—all acknow­ledge its obligations; and however imperfectly, in the purposes of Divine Providence, its efficacy has been shown in the practice of Christians, it has not been wholly inoperative upon them. Its effect has been upon the manners of nations. It has mitigated the horrors of war – it has softened the features of slavery – it has humanized the intercourse of social life. The unqualified acknowledgement of a duty does not, indeed, suffice to insure its performance. Hatred is yet a passion, but too powerful upon the hearts of Christians. Yet they cannot indulge it, except by the sacrifice of their principles, and the conscious violation of their duties. No state paper from a Christian hand, could, without trampling the precepts of its Lord and Master, have commenced by an open proclamation of hatred to any portion of the human race. The Ottoman lays it down as the foundation of his  discourse.

Finally, of most immediate, ongoing relevance to the current misguided Iranian nuclear negotiations charade, Adams warns even non-Muslim victors not to be too  reassured:

… by a false and delusive promise of peace;… the faithful follower of the prophet, may submit to the imperious necessities of defeat: but the command to propagate the Moslem creed by the sword is always obligatory, when it can be made  effective.

He concludes by describing a historical example of Islamic dissimulation, via linguistic subterfuge, during treaty negotiations from the (then recently past) Barbary jihad wars  era:

The commands of the prophet may be performed alike, by fraud, or by force. Of Mahometan good faith, we have had memorable examples ourselves. When our gallant [Stephen] Decatur had chastised the pirate of Algiers, till he was ready to renounce his claim of tribute from the United States, he signed a treaty to that effect: but the treaty was drawn up in the Arabic language, as well as in our own; and our negotiators, unacquainted with the language of the Koran, signed the copies of the treaty, in both languages, not imagining that there was any difference between them. Within a year the Dey demands, under penalty of the renewal of the war, an indemnity in money for the frigate taken by Decatur; our Consul demands the foundation of this pretension; and the Arabic copy of the treaty, signed by himself is produced, with an article stipulating the indemnity, foisted into it, in direct opposition to the treaty as it had been concluded. The arrival of Chauncey, with a squadron before Algiers, silenced the fraudulent claim of the Dey, and he signed a new treaty in which it was abandoned; but he disdained to conceal his intentions; my power, said he, has been wrested from my hands; draw ye the treaty at your pleasure, and I will sign it; but beware of the moment, when I shall recover my power, for with that moment, your treaty shall be waste paper. He avowed what they always practised, and would without scruple have practised himself. Such is the spirit, which governs the hearts of men, to whom treachery and violence are taught as principles of  religion.