It is being described as a “vile anti-Semitic speech by Iran’s vice premier” and it “is a startling reminder of the odious nature of this dangerous regime,” said American Jewish Committee (AJC) Executive Director David Harris. “This Iranian government consistently has projected its hatred of Jews, threatened Israel’s destruction, while aggressively pursuing nuclear-weapons capability.” 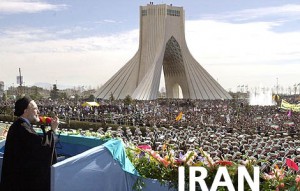 Speaking on the theme of the UN conference, Rahimi also said “Zionists” are “the main elements of the international drugs trade.”

While some European diplomats attending the conference reportedly were shocked by the Iranian leader’s remarks, none of them walked out of the meeting.

AJC criticized the UN for agreeing to hold the conference in Tehran and Western diplomats for attending.

“The contrast between UN Security Council sanctions on Iran, and co-hosting with Tehran an international conference, undermines the goal of exerting maximum pressure on this recalcitrant regime,” said Harris. “Just days after the failed P5+1 talks in Moscow, and while the centrifuges are spinning in Iran, it is outrageous that the UN provided another platform for an Iranian leader to spew his regime’s anti-Semitic hatred.”