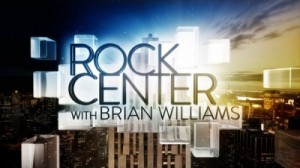 NBC has pulled its primetime newsmagazine series “Rock Center with Brian Williams” from its lineup for the remainder of May Sweeps. In its place, the network will broadcast reruns of “Law & Order: SVU.”

“Rock Center” may be back on the air May 30, though NBC hasn’t released its schedule for that week yet.

Somewhat more concerning for the program: TVNewser hears that “Rock Center” will probably not be part of NBC’s… (read more)