The American Center for Law and Justice (ACLJ), which represents 27 Tea Party organizations unlawfully targeted by the Internal Revenue Service, said today the White House assertion that the IRS misconduct of targeting conservative groups ended in May 2012 does not match the facts. The ACLJ has received 26 IRS questionnaires sent to 18 clients during the past year – letters demanding further intrusive and intimidating questions, with the latest inquiry coming just days before the IRS revealed its targeting scheme.

During the daily news briefing on Monday, White House press secretary Jay Carney told reporters: “The misconduct had stopped in May of 2012.”

“It’s apparent this White House continues to try and create a narrative that simply does not square with the facts,” said Jay Sekulow, Chief Counsel of the American Center for Law and Justice. “Without question the IRS misconduct of harassing and abusing our clients was still in high gear from May 2012 through May of this year. The intrusive and unconstitutional questions continued – with the IRS demanding donor lists and even requesting lists of what reading materials that organizations used. To suggest this tactic ended a year ago is not only offensive, but it is simply inaccurate as well.” 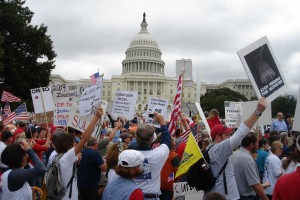 Of the 26 letters sent to the 18 clients during that one year period, all but one was sent from the IRS office in Cincinnati. One request originated out of the Washington, D.C. office.

For example, the IRS office in Ohio focused closely on the structure and workings of the Linchpins of Liberty from Tennessee – demanding answers to intrusive questions – with the most recent letter dated May 6, 2013 – just four days before the IRS admitted that the targeting scheme existed.

In several letters sent to the group, which are posted here, the IRS demands information about minutes of all board meetings, a list of issues that are important to the organization, a list of press releases, interviews with the news media, blog posts, including all activity on Facebook and Twitter.

The IRS also raises questions about the group’s goal, which is to restore and preserve ordered liberty in local communities. The IRS demands information about the content of courses, workshops and seminars organized by the group, even calling for specifics about what kind of information will be taught to young people. That organization’s tax-exempt status is still pending with its application on hold for nearly two-and-a-half years.

The ACLJ is preparing a federal lawsuit to be filed in Washington, D.C. on behalf of a number of clients – including organizations and groups that it has represented during this IRS assault – as well as new groups that have approached the ACLJ in recent days. The ACLJ is finalizing the complaint and continues to add plaintiffs. The lawsuit is expected to be filed early next week.

The ACLJ represented 27 Tea Party organizations targeted by the IRS. Fifteen have received tax-exempt status. Ten are still pending and two other organizations withdrew because of frustration with the IRS.

Despite the assertion by the IRS that this scheme originated with a couple of rogue agents out of the Cincinnati office, the fact is that the ACLJ’s clients have received letters from Cincinnati, but also from two offices in California, El Monte and Laguna Niguel as well as the national office in Washington, D.C. In fact, the Washington office sent a letter to one of our clients as recently as one month ago.

Led by Chief Counsel Jay Sekulow, the American Center for Law and Justice (ACLJ), focusing on constitutional law, is based inWashington, D.C. and is online at www.aclj.org.