Editor’s Note: Platon is considered a heavy hitter among photographers. When Time Magazine uses him for a photo shoot, that typically means something important.  Well, that is what Huffington Post writer Michael Shaw thinks, as seen in a recent column.  If Platon is taking the picture, it is safe to assume that Time thinks Perry will be the GOP nominee.  Hmmm… read it yourself and come to your own conclusions, but make sure you leave your comments here. 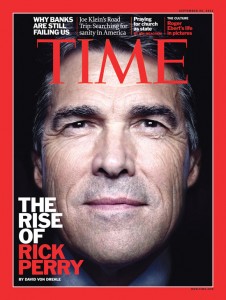 Rockstar photographer, Platon, has done five presidential candidate covers for TIME, three of Obama, one of McCain, and one of Obama and McCain. (You can see them here on Platon’s site.) Of those five, two of them employ the distinctive and dramatic style above, the candidate’s head seeming to float in space against a mostly black background. I say “distinctive” as much for the effect as the fact these covers are practically iconic by now.

So, you remember my problem with TIME’s “death of bin Laden” cover? the one where they “X’d” him out with two red lines across his face. Having used the “cross out” effect three times previously, first on Hitler, then on Saddam Hussein, and then on an al Qaeda bad guy in Iraq the U.S. military had been making a lot of noise about, my argument was that covers “of a type” carry meaning in this hyper-visual, “Google-Imaged” world we’re all surfing around in.

Which leads me back to Platon, the latest TIME cover, and the overnight-sensation…(read more)