Jimmy Carter has long been difficult to watch or listen to.  Back when he was president he seemed to have a disconnect with the American People that we had not seen until Barack Obama came along.  Maybe this is considered a “quality” when you preside over a disastrous economy.  His open hostility towards Israel has grown over the years from where he perceived them first as a nuisance, to where today it is a “menace” to peace in the Middle East.

Recently Carter went to Egypt to be an official observer of the Egyptian elections. Many other organizations that monitor elections would not do it because the Egypt government had put too many restrictions on them and they realized that being there — without being able to fully observe — would give the government legitimacy.

In preparation for the elections, Carter spoke with Michele Kelemen of PBS Radio. Here is that interview in its entirety, with a few added comments of my own:

MICHELE KELEMEN, BYLINE: The Carter Center, known for monitoring elections around the world, is the only American group authorized to witness the vote in Egypt. One hundred monitors will be traveling around the country, while former President Jimmy Carter stays in Cairo to visit polling stations there.

PRESIDENT JIMMY CARTER: This is our 90th election in which we have been involved. All of them have been challenging or disturbed or troubled in some way. And this is, I think, one of the most important ones we’ve ever done.

KELEMEN: President Carter has a long history in the country, having brokered the Camp David Accords between Egypt and Israel in 1978. He says his organization’s right to monitor the vote was never in doubt, but there are restrictions. 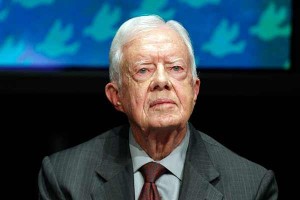 CARTER: We got our credentials quite late, on the 16th of this month, just a few days before the election. Secondly, we are restricted in what we can talk about to the press for the first time. We can’t comment on the process of the election or the results. And the third thing is that we are limited to 30 minutes’ visitation at each polling place, except we can stay there as long as we want to when they start counting votes.

They got their credentials late, according to various news sources, in order to make sure they were as unprepared as possible before coming. They are “restricted” in such a manner that they may not be able to point out the problems with the results, which is why other monitoring groups chose not to attend. The “30 minute” limit to visit a polling place makes it impossible to call such an election anything but a sham. Only 30 minutes of legitimate voting for places that were open many hours? This, again, is why other organizations simply would not grace Egypt with their presence.

KELEMEN: In an interview, President Carter said he agreed to work within these limitations because this vote is so important. Other Egypt watchers, though, are raising concerns.

SHERIF MANSOUR: Because most of the problems with this election have started long before the election day.

KELEMEN: That’s Sherif Mansour, who’s with Freedom House. He says there are questions about campaign financing and the election commission’s decision to disqualify many candidates. But he says nongovernmental groups have been busy defending themselves from Egyptian legal challenges rather than doing the work they normally do.

Mansour provided a much more honest assessment of the situation in Egypt.  Candidates were told by the governing authorities whether they can run and there were huge additional burdens on time and money on candidates who did not meat the ruling Generals arbitrary requirements.

SHERIF MANSOUR: Because most of the problems with this election have started long before the election day (emphasis added, the most important quote in the interview).

KELEMEN: The International Republican Institute and the National Democratic Institute didn’t even apply to monitor these elections because they, like Freedom House, are on trial for allegedly operating illegally in Egypt. Mansour says he’ll be back in court June 5th.

MANSOUR: This is a case that’s going to define the role of civil society in Egypt, not just in Egypt, and the Middle East transitions, and across the world. So I think if there is a chance to fight it to the end, we should.

KELEMEN: The Carter Center doesn’t have those same legal troubles, and former President Jimmy Carter is taking a longer view of Egypt.

CARTER: Well, of course this is a step-by-step process of a complete revolution deviating from a 60-year military dictatorship, in effect, to an absolutely free and unrestricted right of people to choose their own parliamentary members and their own president.

Obviously carter didn’t hear Mansour. This election was far from “absolutely free and unrestricted.” Furthermore, even a person with a high school education knows that Jimmy Carter helped preserve the military dictatorship he condemns with his foreign policy of the late 1970s.

KELEMEN: And you’ve monitored a lot of different elections, as you said. How does it feel to be there right now, given your own history with Egypt?

CARTER: I’m really proud, and I feel like I’m a member of the Egyptian population. I feel like these people belong to me and that I belong to this country. Whenever I meet any Egyptians anywhere in the world, on an airplane or in Asia or wherever, they always come up and want to embrace me and thank me for the peace agreement that’s kept them out of war now for the last 30-something years. So I feel very close to Egypt, and I’ve been very pleased to see what the people themselves have done, both with the original revolutionary spirit that was on the streets that overthrew a dictator in January of a year ago, and also that now are going through this process. So I’m pleased and honored and excited about the election.

KELEMEN: President Carter plans to be out at the polls in Cairo in the morning. Michele Kelemen, NPR News, Washington. Transcript provided by NPR, Copyright National Public Radio.