From the Associated Press:

John Edwards’ campaign finance fraud case ended in a mistrial Thursday when jurors acquitted him on one of six charges but were unable to decide whether he misused money from two wealthy donors to hide his pregnant mistress while he ran for president. 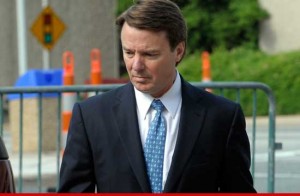 The trial exposed a sordid sex scandal that unfolded while Edwards’ wife was dying of cancer, but prosecutors couldn’t convince jurors that the ex-U.S. senator and 2004 vice presidential candidate masterminded a $1 million cover-up of his affair.

“While I do not believe I did anything illegal, or ever thought I was doing anything illegal, I did an awful, awful lot that was wrong and there is no one else responsible for my sins,” Edwards said on the courthouse steps.

He also said he had hope for his future.

“I don’t think God’s through with me. I really believe he thinks there’s still some good things I can do.”

Edwards would have faced up to 30 years in prison and $1.5 million in fines if convicted of all charges. He did not testify, along with his mistress Rielle Hunter and the two donors whose money was at issue.

Jurors acquitted him on a charge of accepting illegal campaign contributions, involving….(read more)