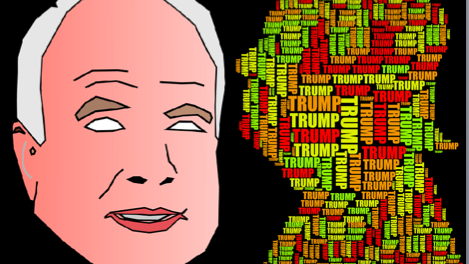 You have to laugh when The Washington Post, an obsolete media outlet owned by Jeff Bezos, the Amazon chief who has a $600 million contract with the CIA, lionizes John McCain for going after President Trump. See. See! Even Republicans think Trump is dangerous, unhinged, unstable, and a threat: but a threat to what? Perhaps the ongoing and increasing desperation of the obsolete media, the Marxists in higher education, and the bipartisan globalists signals that President Trump is a threat not to democracy as many claim but rather to the ideology of globalism, the deep state, and the occult elite themselves. For now, let’s get back up to speed on some of the background to this  insanity.

John McCain’s claim to fame is being shot down in Vietnam and spending time as a prisoner of war. All things equal, this would deserve a great deal of respect. However, McCain disobeyed protocol and endangered American lives by recording audio propaganda that was broadcast by the North Vietnamese. Now McCain is actively seeking to undermine the authority and effectiveness of the current President of the United States. Wasn’t it McCain who admitted to giving the FBI the infamous and completely fabricated ‘golden shower’ dossier about Trump just this past month? Is this the same John McCain who is now being reported as a major source of internal leaks from The White  House?

Come to think of it, wasn’t it John McCain who relentlessly campaigned for war in Syria to topple Bashar al-Assad and who had a major footprint in the disaster that is now Ukraine? Isn’t this the same John McCain who is purportedly in pictures with ISIS and who allegedly had videos of fake beheadings on his computer? What a relief; apparently all of that is just fake news. Thank goodness we have Snopes and McCain’s press release to set the record straight. According to the 80 year old senator who has been haunting the halls of Congress for three and a half decades, he is fighting the good fight against the primary architects of evil in this world: the Russians and Vladimir  Putin.

Let’s cut right to the chase. John McCain is completely compromised and has been a deep state globalist sellout operative likely for decades. He has existed on the neocon fork of the Hegelian dialectic and has served many useful roles, primarily being the first of two milquetoast stooges to be presented as political alternatives to new world order agent Barry Soetoro. These are the same neocons who put together the Project for a New American Century, including a plan for world dominance through war that could only be catalyzed by a ‘new Pearl Harbor’ event, shortly before  9/11.

Anyone with any common sense at all has likely asked themselves a noteworthy and revealing question over the past year as President Trump rose up against all odds: why should we be at war with  Russia?

Ultimately, the goal at the upper echelons of these factions is for unipolar, full spectrum American dominance. This is no longer an option in the 21st century. Beyond the highest points of these think tanks, political consultants, and deep state operatives lies the true agenda: the dismantling of America necessary to pave the way for a new globalist order. War is not just immensely profitable. It is a pivotal part of the strategy to sow the seeds of chaos and destruction in order to step in with a solution when people demand peace and safety at any  price.

What do we get if McCain gets what he wants? More failed states in the Middle East and in Eastern Europe? War with Russia? It’s a pity Arizona was not yet awake enough in this last election cycle to recognize that the establishment Republicans and Democrats are two branches of the same organization. They are controlled and have been for a long time. Now they are, with rare exceptions, controlled opposition. Ultimately, should the Trump administration have political will and prosecutorial teeth, these criminals and conspirators are potentially opening themselves up to charges of fraud, sedition, and treason. If not, then it will be up to the American people. Leaving everything else aside about McCain, the crucial takeaway is that he still wants war with Russia and just won’t let it go. That implies that he’s either a senile fool or a useful  idiot.

But the Russians hacked our  elections!

Given the absence of actual, independent, verifiable evidence that this took place or had an impact, people just aren’t buying it any more. It’s old news, and it is high time that the swamp gets drained. It will be a messy process, but our President – God willing – will be able to push through some vital changes. The Republican establishment will stand in opposition. They will be absolutely steamrolled in 2018 from the right. Americans overall were just starting to wake up in 2016. When the truth bombs start dropping and the light starts shining all of these Republican roaches and weasels will scatter to the  wind.

Plus McCain solicited donations from Russian officials… It’s time to take out the  trash.