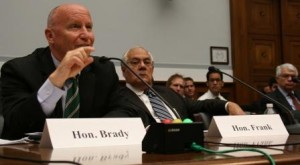 Congressman Kevin Brady (R-TX), Vice Chairman of the Joint Economic Committee, was among those invited today to testify before Ron Paul’s panel on the role of the Federal Reserve.  Brady opened his remarks by stating “Inflation has been called many things—a hidden tax, a government-sponsored reduction in workers’ paychecks, or :theft’ as Dr. Paul (Cong. Paul, R-TX) often says. The American people understand the absurdity of a monetary policy that is designed to debase our currency.

We agree on three key points:

He went on to argue that the problems facing the US were not merely monetary, but included:

He went on to do a review of some of the history of US monetary policy.

Watch his testimony in its entirety.