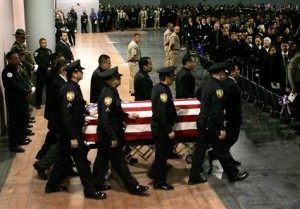 For the second straight year, law enforcement fatalities nationwide rose sharply with 173 federal, state and local officers killed in the line of duty during 2011, according to preliminary data compiled and released today by the National Law Enforcement Officers Memorial Fund (NLEOMF).

This represents a 13 percent increase over the 153 officers killed in 2010 and an alarming 42 percent spike when compared to the 122 officers who lost their lives in the line of duty in 2009.  The primary cause of death in 2011 was gunfire, which claimed the lives of 68 officers and nearly matched the decade-long high of 69 firearms-related deaths in 2007.

For the past 13 years in a row, traffic-related incidents had been the primary cause of law enforcement fatalities.  In 2011, though, the number of officers killed on the roadway dropped by 10 percent.  There were 64 traffic-related deaths among officers in 2011, which matched 2005 for the second-lowest total in the past 15 years.  Of that total, 44 died in automobile crashes, 11 were struck and killed while outside of their vehicles, seven died in motorcycle crashes and two were killed when their car was struck by a train.

“Drastic budget cuts affecting law enforcement agencies across the country have put our officers at grave risk,” declared NLEOMF Chairman Craig W. Floyd.  “At a time when officers are facing a more cold-blooded criminal element and fighting a war on terror, we are cutting vital resources necessary to ensure their safety and the safety of the innocent citizens they protect.”   Mr. Floyd also noted that the NLEOMF is partnering with the U.S. Department of Justice and the National Highway Transportation Safety Administration, among others, on a number of law enforcement safety initiatives to combat this growing problem.

Mr. Floyd cited a recent survey by the International Association of Chiefs of Police that found 60 percent of responding law enforcement agencies had cut back on training, 64 percent had cut back on buying or upgrading major equipment, and 58 percent had cut back on buying or upgrading technology.  A report issued in October by the U.S. Department of Justice, Office of Community Oriented Policing Services, stated that by year’s end, it is expected that nearly 12,000 police officers and sheriff’s deputies will have been laid off.

The preliminary 2011 law enforcement fatality report was released by the NLEOMF in conjunction with Concerns of Police Survivors (C.O.P.S.), a non-profit organization that provides critical assistance to the surviving family members and loved ones of officers killed in the line of duty.

“The hard fact is that for the first time in 2011, more officers were killed in firearms-related incidents than traffic-related incidents,” said Linda Moon Gregory, National President of Concerns of Police Survivors.

“I’m deeply concerned that budget constraints may be compromising the safety of our remaining law enforcement officers due to cuts in personnel and reduced affordability of life saving equipment. At a time when criminals have the latest technology and weapons, we must ensure that our peace officers are adequately equipped and protected,” she stated. Her brother, OfficerJames Homer Moon from the Jacksonville (FL) Sheriff’s Office, was shot and killed in the line of duty in September 1971 and Mrs. Gregory’s family continues to deal with parole issues related to her brother’s death.

The statistics released by the NLEOMF and C.O.P.S. are based on preliminary data compiled and do not represent a final or complete list of individual officers who will be added to the National Law Enforcement Officers Memorial in 2011.

About Concerns of Police Survivors
Concerns of Police Survivors, Inc., provides resources to assist in the rebuilding of the lives of surviving families and affected co-workers of law enforcement officers killed in the line of duty as determined by Federal criteria. Furthermore, C.O.P.S. provides training to law enforcement agencies on survivor victimization issues and educates the public of the need to support the law enforcement profession and its survivors. For more information, visit www.nationalcops.org.