Sheriffs, border agents, and immigration officers all made final pitches to stop passage of the Senate immigration bill S.744 scheduled for a vote today.
National Citizenship and Immigration Services Council (USCIS) Pres. Kenneth Palinkas issued a statement urging lawmakers to oppose the Corker-Hoeven substitute immigration bill, warning that passage would threaten public safety:  “The proposal goes out of its way to provide legalization for criminal offenders while making it more difficult for Adjudication Officers to identify threats to the nation’s security in our ongoing ware against terrorism. It was deliberately designed to undermine the integrity of our lawful immigration system.” 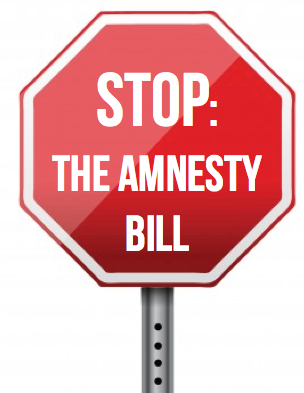 Likewise, Immigration and Customs Enforcement (ICE) union Pres. Chris Crane has released  a letter warning of the dangers of the bill:  “Absent drastic improvements to the interior enforcement provisions, there is no doubt that S.744 will undermine the constitutional rule of law, guarantee future illegal immigration, and place the public at risk.” “[I]nstead of cracking down on the Administration’s abuse of power, S.744 places unprecedented new restrictions on interior enforcement – making the current situation much worse and more hazardous. It is as if S.744 were explicitly written to handcuff law enforcement officers.”
And, sheriffs from around the U.S. gathered today at a media conference at the site of the national sheriff’s convention in Charlotte, NC to voice opposition to the bill. Led by Rockingham County Sheriff Sam Page, the sheriffs called on senators to vote against the bill, which they said would dangerously undermine the safety of those they’ve sworn to protect.
See full post:  http://cnsnews.com/blog/craig-bannister/sheriffs-border-agents-immigration-officers-make-final-plea-defeat-senate