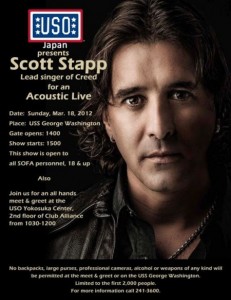 One year after Japan’s devastating 9.0 earthquake and tsunami, Grammy Award winner Scott Stapp, singer, songwriter, voice of Creed and founder of the Scott Stapp With Arms Wide Open Foundation, a charity organization dedicated to helping underprivileged children and families around the world, is visiting some of the worst hit areas this March to show support for continued recovery and revitalization and promote global support for Japan.

In cooperation with the U.S. Embassy in Tokyo, IsraAID, U.S. Forces Japan and USO, Stapp will visit with victims of the tsunami of all ages in affected towns such as Sendai and Ishinomaki along Japan’s northeast coastline. Stapp will also meet and greet fans and will perform an acoustic show on board the USS George Washington at Yokosuka Naval Base for several thousand U.S. troops stationed in Japan, many of whom have recently returned from deployment around the world.

“My heart breaks for the victims. One year ago, our friends in Japan suffered a catastrophe of epic proportions. We will not forget the orphans, widows and families that lost every possession they have known. God bless the all those at the US Embassy and our troops on the ground providing medical care, meals and shelter. I am looking forward to performing for our troops stationed in Japan and to let them know that we appreciate the hard work, compassion, and sacrifice required for such an extraordinary humanitarian relief effort,” Stapp cites as his motivation for visiting Japan.

Stapp will be accompanied by wife Jaclyn Stapp, a former Miss New York, children’s book author, model and national spokesperson, who will read her book Wacky Jacky: The Story of an Unlikely Beauty Queen to both Japanese and U.S. military children in efforts to inspire hope and teach lessons in self-esteem and positive outlook.

Fans will be able to partake in live tweets and video messages documenting Scott’s trip via his website,www.scottstappofficial.com.  Scott Stapp is also scheduled to release an upcoming uncensored memoir slated to launch via Tyndale House Publishers this fall.

Scott Stapp is among the most successful artists of the modern rock era. As Creed’s lead vocalist, he has sold over 35 million records, with 26 million sold in the United States alone. He has toured the world several times, selling out arenas and major stadiums. His song, “With Arms Wide Open” won a Grammy as Best Rock Song of 2000.  One Rolling Stone writer has called Stapp “one of the most influential and boldest rock writer/performers of the past 25 years whose fans must be counted in the legions.”

In 2000, Stapp founded the With Arms Wide Open Foundation, a charity organization dedicated to “promoting healthy, loving relationships between children and their families.” In early 2010, Stapp flew to Haiti to help the victims of the 2010 Haiti earthquake. To date, Scott has donated over 1 million of his own record sales to support the foundation’s worldwide humanitarian efforts.