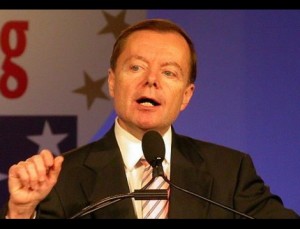 Rick Santorum has marketed himself as “heir apparent” of Reagan’s three-legged stool of small government, strong national defense, and social conservatism. He bolstered that argument Sunday with an endorsement from a leading social conservative.

Former presidential candidate Gary Bauer on Sunday announced his endorsement of former Pennsylvania Sen. Rick Santorum during a campaign event in South Carolina, calling the senator “a conservative leader for our times.”

The chairman of the Campaign for Working Families, Bauer made the following statement:

“I am honored to endorse Senator Rick Santorum in the 2012 GOP Presidential nominating contest. While we have many fine candidates in the competition I believe Senator Santorum best personifies the Reagan-inspired conservatism that unites the GOP.

“More importantly, the main ‘pillars’ of Senator Santorum’s governing philosophy — smaller, Constitutionally based government, lower taxes, a strong and confident American role in the world to keep our nation safe, a commitment to defending America’s families and defending the sanctity of life — is exactly the blueprint to put America back on the right track.

“The 2012 election will be the most important election of this generation. It will likely determine the kind of country our children and grandchildren inherit. America can continue down the road of Obama deficits, big government, higher taxes and slow growth or we can chose Rick Santorum’s vision of a strong, growing, confident America – the ‘shining city on a hill’ that Ronald Reagan constantly called us to be.

“I am confident Rick Santorum will end the Obama era and I am proud and excited to endorse Rick Santorum to be the 2012 Republican Presidential nominee.”

Bauer served in President Ronald Reagan’s administration for eight years, as Under Secretary of Education under Bill Bennettand as Chief Domestic Policy Advisor, directing domestic policy development during Reagan’s last two years in office. He is the former Senior Vice President of Focus on the Family, and the former President of Family Research Council. In ten years, Bauer led FRC from a three person, $1 million operation, to a 120 person, $14 million operation, housed in its own headquarters in downtown Washington. Bauer was himself a contender for the White House in the 2000 race for the GOP nomination. A published author, he is currently chairman of the Campaign for Working Families, a political action committee dedicated to electing pro-family, pro-life conservatives to public office. In its first two years of operation, Campaign for Working Families raised $7 million with 90,000 individual contributors and today remains one of America’s largest conservative political action committees.