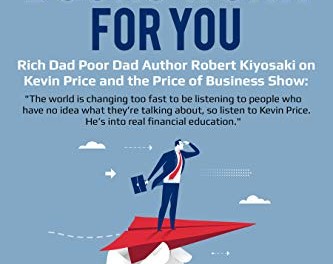 The long awaited book on the challenges people face when it comes to “New Rich” books was released today by USA Business Radio. It was written by US Daily Review Editor and Chief, Kevin Price.

Robert Kiyosaki of Rich Dad Poor Dad fame considers Kevin Price an authority in financial freedom, stating:
“The world is changing too fast to be listening to people who have no idea what they’re talking about, so listen to Kevin Price. He’s into real financial education.”

“Making ‘New Rich’ Books Work for You” is by nationally syndicated radio host and multi-award winning journalist, Kevin Price. It is being published by USA Business Radio. It has been described as “The Missing Link” in “New Rich” literature.

So was the critically acclaimed book “The Four Hour Work Week” by Tim Ferriss a waste of time? Was Ferris the only one that profited from it? For most it seems to be merely a “good read” and little else.

Kevin Price, Host of the nationally syndicated Price of Business show read the book by Ferris THREE TIMES before seriously implementing it. He had nothing to show for it from his earlier attempts, but he kept going back to it. He wanted it to work, but couldn’t figure out how to make it work for him.

Then something happened — he was sick and tired of 60 hour work weeks, always exhausted, and of the sense of being on a constant hamster wheel. He was at the point where he had to implement the Tim Ferriss approach or find something else to do for a living. After reading it one more time, he decided to take it seriously action. He decided to treat it as if it COULD work. He took a cavalier approach, which included some reckless abandonment, and the results were very positive.

In February 2016 Price decided to treat “The Four Hour Work Week” as a blueprint, and not just a clever book. In less than 60 days:

* In 90 days he saw a marked increase in his income and made over 20 percent more that year, while cutting his hours by over 60 percent

Order your copy today with special pricing of only 99 cents.