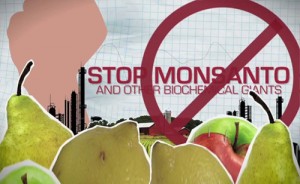 A new grassroots campaign entitled the ‘Monsanto Video Revolt’ sponsored byStoryleak, Global Healing Center and NaturalNews has been launched by activists in order to generate further awareness over the dangers posed by both biotech juggernaut Monsanto and genetically modified organisms (GMOs) at large.

On July 24, the campaign calls on individuals from around the world to post videos regarding Monsanto on all video sharing and social media websites in an effort to communicate the dangers that Monsanto’s GMOs and herbicides pose to our bodies, our environment, and our children.

Participants are asked to include ‘Monsanto Video Revolt’ in the video title in order to drive the campaign into the trending topics of the international news media. Additionally, the Monsanto Video Revolt website contains contact information for lawmakers and environmental regulators.

The Environmental Impact Statement (EIS) by the USDA warns that individuals who consume Glyphosate (Roundup) may experience “general and non-specific signs of toxicity from subchronic and chronic exposure to glyphosate [herbicide].”  The EIS also cautions that, “infants consuming fruit and all age groups consuming vegetables may be at risk of adverse effects associated with acute exposure to glyphosate residues.”  Continued use of these herbicides creates long-term environmental damage and poses an extreme health risk.

For all the efforts of Monsanto and other agri-science companies, GMOs cannot be controlled.  Found guilty by a US federal jury in a December 4, 2009 decision, an attorney for Bayer CropScience admitted that it could not prevent GMO contamination of non-GMO crops despite “the best practices [to stop contamination].”  The DNA of these GMOs have even been found to survive digestion and further contaminate the meat and dairy of animals fed on these crops.

The Monsanto Video Revolt campaign seeks to bring awareness to these issues.