By Beckey Burgoyne, Special for US Daily Review 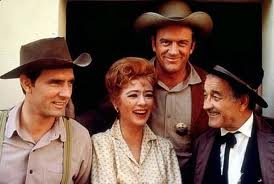 Amanda Blake and the cast of Gunsmoke

Actress Amanda Blake of Gunsmoke, the historic western television series, achieved iconic celebrity as Miss Kitty Russell, owner of the Long Branch Saloon and faithful love of stoic Marshal Dillon portrayed by James Arness.  The notoriety of Miss Kitty remained with Blake all of her life even after the show’s departure after twenty years running on CBS.  “Amanda is Kitty,” quoted Milburn Stone, better known as crusty, wise Doc Adams of theDodge City troupe.  Miss Kitty was Amanda Blake’s legacy – enough for most in a lifetime but not Blake.

A mere miniscule bit of research reveals Blake to have had an immense passion for the “furried, feathered, and fuzzied” of the world.  Amanda Blake worked tirelessly for multiple organizations including the Phoenix Zoo, the zoo’s “Little Horse Show”, Humane Society of the United States, Arizona Animal Welfare League, and Arizona Sonora Desert Museum, to name a few.  Blake sallied forth her celebrity to assist with countless fundraising efforts and public awareness events for such groups while also maintaining a personal brood of rescued creatures.  Among her furry “children” were cheetah cubs bred and born in captivity at Blake’sPhoenixestate – a feat deemed impossible by zoological experts in the 1970’s – but accomplished via diligent research by Blake and husband, Frank Gilbert.  Gilbert subsequently established “Cheetah’s Unlimited” while sharing their research success with zoos around the world.

Fast forward to 2010 and the publication of Perfectly Amanda: Gunsmoke’s “Miss Kitty” – To Dodge and Beyond, a book which brought Blake’s vivacious and inspiring story to life.  As author of Amanda Blake’s only penned biography, I wished to continue her passion for the “furried, feathered, and fuzzied” by seeking animal organizations to feature Blake’s story in return for a portion of the proceeds from book sales.  Enter the Conquistador Equine Rescue and Advocacy Group, a nonprofit equine welfare organization based inPhoenix,Arizona.  Five Star Publications, Inc., arranged a book signing/fund raising event located at The Western Ranchman Store inPhoenix during a March 2011 book signing tour.  Perfect!  Amanda Blake would be proud.

When planning the event, a smile of irony surfaced at the notion of horses being first to receive benefit from Blake’s story in light of one of her more tumultuous moments shared here in abbreviated form from Perfectly Amanda:

There were rare instances when Amanda’s true redheaded fight and temper would explode to the surface while at work on the set of Gunsmoke…One such occasion came as a result of her absolute and long standing fear of falling from a horse.  Early on in the series Amanda was given a Gunsmoke script that called for Kitty Russell to ride a horse – side saddle, down the street of Dodge.  Norman Macdonnell recalled, “she roared into my office, waving the script, screaming that she’s afraid of horses.  It was pure, redheaded terror.  When I finally calmed her down she said, ‘Tell me, Norman, do you know a good riding instructor?’  She’s been on horses ever since.” (75)  Amanda’s version of the same incident was the following: “For years I was frightened to death of them (horses).  And when I got a script one day for Gunsmoke and was told I had to ride a horse I cried.  I begged to be let out of that particular scene, but it was important to the story.  Well, all that first morning I stayed on the animal.  Finally, around three in the afternoon I got used to it and began to enjoy it.  I’ve been an idiot about horses ever since…”(57) …Amanda’s ability to sit a horse side saddle became proficient enough that she seldom used stunt doubles for riding on the show in the earlier years of Gunsmoke… Albeit with reluctance, Amanda bravely conquered an enormous fear and won the battle.

Amanda Blake conquered her fear.  Conquistador, now a Champion Peruvian Paso, did the same.  In 2001, Conquistador, a young chestnut Peruvian Paso stallion, was rescued from starvation, dehydration, and abuse which left him blinded in one eye and lame.  Because of the passionate work of a coalition of animal organizations and Arizonians, Conquistador survived and thrived along with 12 additional Peruvian horses from the same rescue event.  Conquistador serves as inspirational advocate for the “Conquistador Equine Rescue and Advocacy Group.”  His tenacity and great heart are shining examples that the “furried, feathered, and fuzzied” of the world need and appreciate our help.

The Conquistador Equine Rescue and Advocacy Group (CERAG) has since rehabilitated over 300 horses in the United Statesand assisted in the rescue of 100 horses in Canada.  Established with Dr. Pat Haight at the helm, the CERAG provides assistance to horses, including rescue and rehabilitation, legislation and awareness.  For more information regarding CERAG, visit www.conquistadorprogram.org.  Your assistance is most appreciated.

The coupling of Perfectly Amanda: Gunsmoke’s “Miss Kitty” and Conquistador Equine Rescue and Advocacy Group resulted in a memorable event where author and horse met face to muzzle along with other faithful supporters of both.

Perfectly Amanda: Gunsmoke’s Miss Kitty is a publication of Five Star Publications, Inc. of Chandler, Arizona.  For more information about the award-winning Perfectly Amanda: Gunsmoke’s “Miss Kitty” visit www.PerfectlyAmanda.com.    Beckey Burgoyne hails from Danville, Illinoiswhere she currently teaches Physical Education at the award-winning NortheastElementaryMagnet School.  A graduate of EasternIllinoisUniversityin Charleston, Illinois, Burgoyne has always had a passion for the theater and English.  Putting her two loves together, it only made sense that her first book would be about the famous actress who inspired her in so many ways. Perfectly Amanda: Gunsmoke’s “Miss Kitty” – To Dodge and Beyond is the result Burgoyne’s lifelong admiration of the great actress Amanda Blake and her character, Kitty Russell. Research and writing the biography entailed three years interviewing those from Blake’s many worlds, perusing multiple media resources, and traveling coast to coast – all events creating a journey of a lifetime for Burgoyne.