Several news sources are reporting on a new book that argues that Rev. Jeremiah Wright — Barack Obama’s controversial, anti-American and anti-Semitic, pastor was bribed by a Barack Obama ally.  After the campaign for President, that ally’s organization received over $5.9 million in federal funds.

Kevin Price, Publisher and Editor in Chief of US Daily Review interviews

The Daily Caller reports that, “On an appearance on Sean Hannity’s radio show on Monday, ‘The Amateur‘ author Edward Klein revealed the name of a close ally of President Barack Obama that his book alleges offered a $150,000 bribe to Rev. Jeremiah Wright to be quiet until after the 2008 election.” 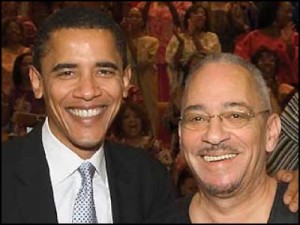 “‘Well, what happened is that after ABC’s Brian Ross broadcast the video tapes of the Rev. Wright ‘God damning America’ and slamming whites and slamming Jews and America, he was contacted by one of Obama’s closest personal friends — a guy who travels on Obama’s plane, who plays basketball with him, who goes on vacation with him,’ Klein said. ‘His name is Dr. Eric Whitaker. Dr. Whitaker is the vice president of the University of Chicago Medical Center and he’s a member of Obama’s very tight inner circle. And he sent an email to a member of the Trinity United Church of Christ.’”

“Klein reminded listeners that Whitaker’s hospital is the same one that paid first lady Michelle Obama $316,962 a year to handle community affairs for the University of Chicago Medical Center while her husband served in the U.S. Senate.”

This is just one more scandal to plague an administration that has been riddled with controversy. Certainly the implications of this event are small compared to Operation “Fast and Furious” that led to the loss of both US and Mexican lives, but it is, again, the exact type of thing that the Obama team needed exposed in its already fragile presidency.